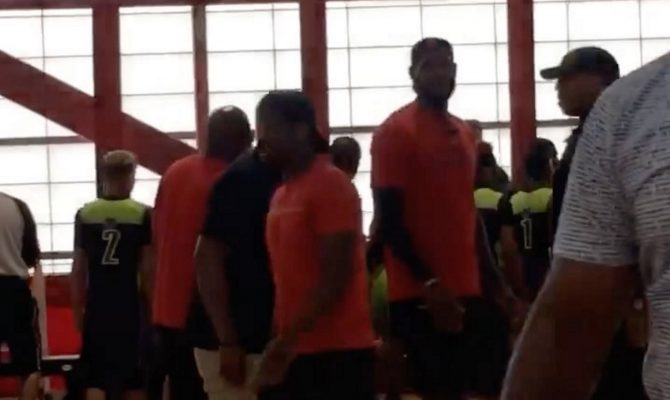 LeBron James has made news recently for attending many of the games his son, LeBron James Jr., has been playing in an AAU tournament taking place in Las Vegas.

With James Jr. showing off many of the skills of a future star, some in the crowd seem to have forgotten that they are watching a group of 12-year-olds play and decided to take out their feelings on James after his son’s team had lost.

In a video, the final buzzer can be heard followed immediately by a fan heckling both James and his son with the all-too-familiar “Warriors” chant.

SOUND ON ? Fans chant "Warriors" when they beat LeBron and Bronny ?

Midway through the fan’s chant she seems to stop in her tracks. The camera then zooms to reveal James staring the woman down with the same gaze that has left countless NBA defenders shaking in their sneakers.

Clearly this woman needs to remember that she’s supposed to be cheering for the children in the game, and not trying to get a rise out of the superstar father of one of the players.