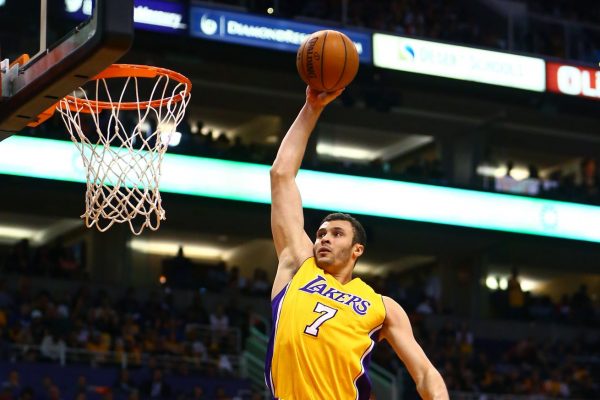 The dramatic trade on Thursday between the Cleveland Cavaliers and Los Angeles Lakers involved a transfer of two players from each team, as well as the Cavaliers’ own first-round selection being sent to Los Angeles. One of the players that will be joining the Cavaliers is Larry Nance Jr., who gave thanks on social media to the Lakers and pointed toward his future with the Cavs.

I’ll be forever grateful for everything that the @lakers organization, the fans, and my teammates have done for me! It’s been an unbelievable experience and I couldn’t be happier with where I started this journey! Thank you guys for the past 2 1/2 years! On to THE LAND I go.. #JustAKidFromAkron

The 25-year-old Nance, the son of Cavaliers legend Larry Nance Sr., is coming to play for the Cavs along with guard Jordan Clarkson. In addition to the draft pick sent, Cleveland also sent point guard Isaiah Thomas and veteran center Channing Frye to the Lakers.

The younger Nance was born on New Year’s Day 1993 in Akron, OH, attending surburban Revere High School. He’s currently in his third season in the NBA after having been a Lakers first-round selection (27th overall) in 2015 out of the University of Wyoming.

In 42 games with the Lakers this season, Nance has started 17 contests and is currently averaging 8.6 points and 6.8 rebounds. Both of those numbers are above his career averages in those categories of 6.9 and 5.7, respectively.

At present, there’s no indication if Nance will suit up and play for the Cavaliers in their Friday night game in Atlanta. However, he should see action during Sunday’s clash against the Boston Celtics.