LeBron James Speaks Out on Effect of Kevin Love’s Injury 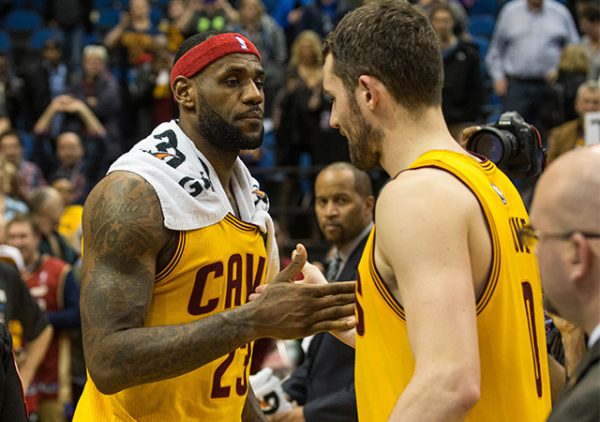 A good deal of the pressure that the Cleveland Cavaliers face in the wake of Kevin Love’s arthroscopic knee surgery will be on the shoulders of LeBron James over the next six weeks. Despite the struggles that lie ahead over Love’s expected six weeks of rehabilitation, James is prepared for the challenge.

Speaking to reporters during the team’s morning shootaround at Target Center in Minneapolis, James had a simple response to one of the questions posed:

LeBron James, when asked if he needs to step up in light of Kevin Love's injury: "I've never stepped down"

Love’s injury isn’t the first time that James has been forced to deal with his absence. Most famously, Love missed the final three rounds of the 2015 postseason after Boston’s Kelly Olynyk dislocated his shoulder while going for the ball in Game 4 of the first playoff round. During the remainder of that postseason, James and the Cavaliers went 10-6, with the four losses in the finals coming after Kyrie Irving also went out with a season-ending knee injury.

On other occasions, Love has dealt with back trouble, a concussion and even food poisoning last month, which makes the situation somewhat familiar territory for James. One positive in the timing of Love’s injury for the Cavaliers is the fact that one of the weeks for Love’s recovery will come during the All-Star break.