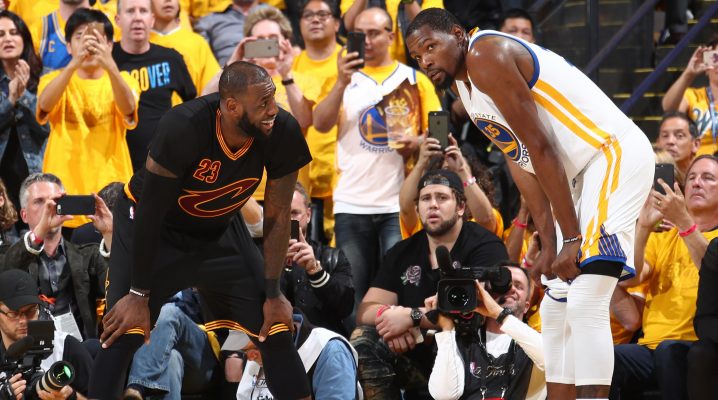 As if this NBA season couldn’t get any crazier, it’s now being reported by Chris Haynes of ESPN that Cleveland Cavaliers superstar LeBron James is opening to joining the Golden State Warriors next season should they clear the necessary cap space:

“If the Golden State Warriors can create a max salary slot this offseason, the defending NBA champions could position themselves to secure a meeting with LeBron James, league sources told ESPN.

“There is no indication that Golden State is evaluating such options to acquire the Cleveland Cavaliers star at this time.

“Out of respect for the Warriors’ winning culture, James would listen if Golden State explored ways to clear the necessary cap space, sources said.”

James is expected to opt out of his $35.6 million player option this season and become an unrestricted free agent for the third time in his career, although re-signing with the Cavs is not out of the question.

Then, Gilbert decided to execute a trade which favored the Cavs’ future, as opposed to a win-now mentality. That trade involved sending superstar Kyrie Irving, whom James wanted to keep on the Cavs, in exchange for Isaiah Thomas, Jae Crowder, and two future draft picks.

Thomas has been a disappointment thus far, as he currently has one of the worst defensive ratings in the NBA, and recently went just 2-of-15 from the field in a game against the Miami Heat.

According to Haynes, the most realistic way for the Warriors to acquire James would be through a sign-and-trade involving Klay Thompson and Andre Iguodala:

“A sign-and-trade scenario would be the most realistic way for Golden State to acquire James. The Warriors could build an offer around Klay Thompson and Andre Iguodala to match salary and tempt the Cavaliers into making a deal, according to ESPN’s Kevin Pelton.

“To make a sign-and-trade possible, Golden State also would need Kevin Durant to decline his player option and take even less than his current annual salary of $25 million, in addition to moving Shaun Livingston’s salary to a team with cap space. Golden State likely would have to fill out its bench with players making the league minimum.”