Kevin Love Not Buying That Kyrie Irving Is a Bad Teammate 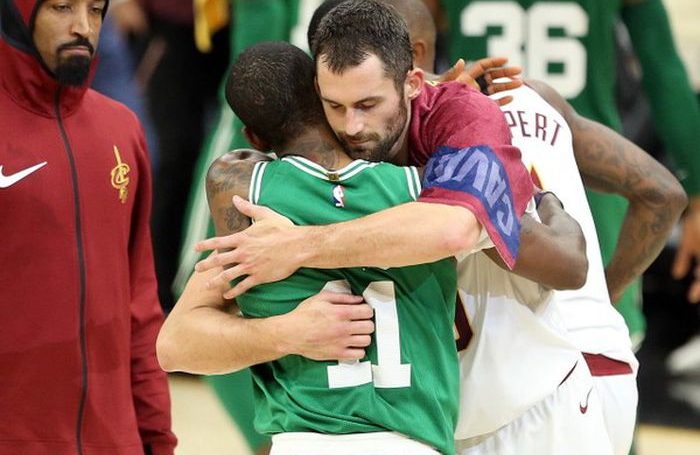 Former Cleveland Cavaliers guard Kyrie Irving’s reputation has suffered in the past few years since he’s now on his third team in four seasons, but former teammate Kevin Love offered an impassioned defense of the veteran last week.

Chris Fedor of Cleveland.com looked at how criticism over Irving’s reported moodiness both with the Cavs and Boston Celtics has affected how people view his contributions on the court. Love made clear that his three years with Irving on the Cavaliers were positive ones.

“I’ve only had good experience with Kyrie,” Love said following shootaround in Dallas on Friday. “Obviously, it’s easy to say because we had so many teams that went to the Finals and played at such a high level. You know, it’s tough, I think so much of the time these days that the commentary is so much the content, so I think people take some stories and run with them.

“For me, I think Kyrie, when he loses he’s super upset, sure, but he’s a talented player who is going to bring it every night, and everybody wants the storyline to be, ‘Hey, look at how great Boston is doing.’ Boston has a hell of a team, they’ve had a hell of a team. Brad (Stevens) is a great coach, so they had a lot of returning guys that stepped up. Jaylen Brown got paid, so he’s going out there and playing extremely well. So I think it’s just adjusting to a new city, new team, new organization in Brooklyn, and them adjusting to how Kyrie plays. So, I don’t really believe the narrative that he’s a bad teammate, because I never experienced that.”

Irving demanded a trade from the Cavaliers in 2017 and was dealt to Boston. Despite his apparent happiness with the Celtics, which included some criticisms of his time with the Cavs, he left in free agency after last season and signed with the Brooklyn Nets.

Fedor noted that Irving’s moody image apparently continued during the Nets’ preseason trip to China last month. That developed into media speculation about how well Irving was fitting in with his new teammates.

“The conversation about Irving as a teammate has only picked up since,” Fedor wrote. “Earlier this month, it was revealed that some within the Nets organization were puzzled by Irving’s mood swings during a preseason trip to China. ESPN’s Stephen A. Smith followed up on that story, saying he was ‘not hearing good things’ about Irving in Brooklyn.”

Fans of both the Cavaliers and Celtics won’t have the opportunity to see Irving in action this week because of a shoulder injury. That’s a situation that’s become routine in Cleveland, since the guard has only played in the city once since he was traded: in the 2017-18 season opener.

Yet, Cavs fans with longer memories will always have a special place in their hearts for Irving. That’s because he hit the game-winning shot in Game 7 of the 2016 NBA Finals to give the Cavaliers their first and only league title, the sort of reputation that every player dreams about.