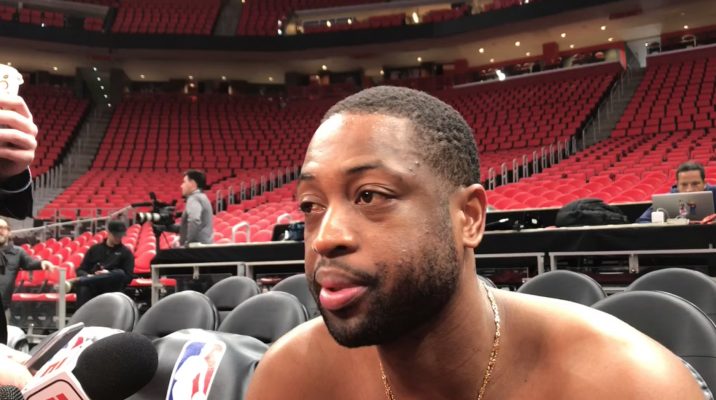 One night after returning to action following a two-game absence, Cleveland Cavaliers guard Dwyane Wade‘s status for the team’s home game on Wednesday night against the Miami Heat remains uncertain. That’s because the 36-year-old veteran is currently dealing with an issue involving his left shoulder.

Joe Vardon of Cleveland.com reported how the problem came about:

“As for Wade’s left shoulder issue, coach Tyronn Lue said Wade did something to it at practice recently. Wade underwent surgery on his left shoulder in 2007 and it’s occasionally bothered him since.”

Wade himself offered his description of how he deals with the issue on a continuing basis:

“Sometimes it gets hit and doesn’t feel as great, but I’ve had a couple days off, it feels a lot better.”

Those days off were to mourn the death of Wade’s agent, Henry Thomas, who died last week of complications from a neuromuscular disorder. Wade missed two games and could miss Saturday night’s home contest against the Houston Rockets to attend Thomas’ funeral, which is scheduled for this weekend.

“Yeah, I have to go, but I won’t miss any significant time,” Wade said.

In his return to the court on Tuesday night, Wade scored 18 points and achieved another career milestone by passing Hall of Famer Larry Bird on the NBA’s all-time scoring list.