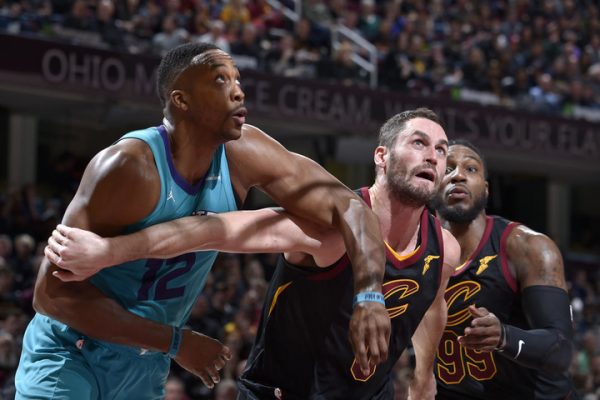 (Cleveland, OH) — Two defensive stops by the Cleveland Cavaliers in the final 11.1 seconds helped them extend their winning streak to seven games with a 100-99 victory over the Charlotte Hornets at Quicken Loans Arena on Friday night. LeBron James notched a triple-double in the game, with Kevin Love adding a double-double to the Cleveland scoring effort.

The Cavaliers had trailed 98-94 with under three minutes remaining, but James would tie the game at 99 by delivering a three-point play with 2:28 to go and then followed it up with a driving layup with 1:48 left. J.R. Smith would then split a pair of free throws with 48.2 seconds left, with the Cavaliers then being in position to put the game away after getting a subsequent rebound. However, James missed a three-point attempt that was rebounded by the Hornets with 11.1 seconds remaining. That was followed by two shots from the Hornets’ Jeremy Lamb and Kemba Walker, but both came up short to give Cleveland the victory.

“We knew they were going to Kemba ,” James said immediately following the contest. “Tried to make it tough on him. He had a pick-and-roll on him and he had a little daylight in front of him, but I was able to cut him off. He swung it to a teammate, Lamb, but J.R got a great contest and I tried to get another contest on Kemba when the ball went all the way back. Great win for us.”

James then spoke about the level of improvement shown by the defense:

“They talked so bad about our defense to start the season,” James said. “So for us to be playing like we are now and for us to get a stop in that fashion, lets me know, lets our team know and lets everyone know that we’re on our way, especially defensively.”

Cavaliers head coach Tyronn Lue spoke about the simple change that was involved with helping the Cavaliers defense improve in recent weeks:

“You can’t get much simpler than switching 1 through 4 and then blitzing 5,” Lue said. “I thought we just wore him (Walker) down tonight.”

James finished with 27 points, 16 rebounds and 13 rebounds, scoring eight of those points in the final quarter. Meanwhile, Love tossed in 11 points and grabbed 13 rebounds, with four other Cavs players also reaching double figures in the scoring department. Smith scored 16, while Kyle Korver added 13, Jae Crowder chipped in with 12 and Dwyane Wade finished with 11 points on the night.

Crowder was asked afterward about how the blitzing strategy was aiding the team’s defense.

“We want to be aggressive on both sides of the ball and that gets us started,” Crowder said.

The Cavaliers won’t play again until Monday night when they travel for a road game against the Philadelphia 76ers. That contest will tip off just after 7 p.m. ET and be followed 24 hours later with a Cavs home game against the Miami Heat at that same time.

“We won ugly tonight and we won ugly on Wednesday night,” Love said. “But a win is a win and we won’t look back.”