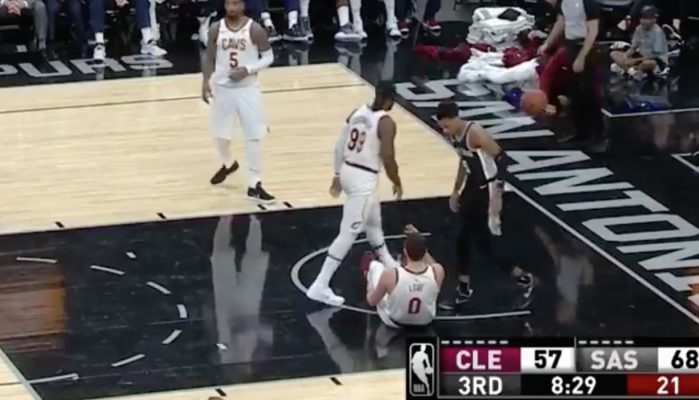 The Cleveland Cavaliers continue to be mired in a frustrating slump that’s seen them lose six of their last seven games and 10 of their last 13 contests. Along the way, conflict between players has been reported, a controversy that likely won’t be quelled by video of a brief moment during the Cavaliers’ 114-102 loss to the San Antonio Spurs on Tuesday night.

Less than four minutes into the second half, San Antonio scored on a basket to extend their lead, 70-57. In attempting to defend on the play, the Cavs’ Kevin Love fell to the ground after being struck in the face, allowing the Spurs’ LaMarcus Aldridge to score. Instead of helping Love to his feet, his teammate, Jae Crowder, simply walked past him to inbound the ball.

Love can't even get anyone to help him up…

The play might otherwise be forgotten except for the fact that on Monday, Love was the target of criticism from teammates during a team meeting. The dispute stemmed from Love’s actions in leaving Saturday’s loss to Oklahoma City before the game was over and him missing practice the following day. Love had left the game after just three minutes reportedly because of illness and then missed the practice because of a migraine headache.

The loss on Tuesday puts the Cavaliers’ season record at 27-19, which places them third among all teams in the NBA’s Eastern Conference. However, they’re currently six games behind the Boston Celtics for the top seed in the playoffs that begin in April. More precariously, they stand just a half game ahead of the Miami Heat and 1.5 games ahead of the fifth place Washington Wizards.

The Cavaliers will attempt to put an end to their struggles in a pair of home games this weekend. On Friday night, they host the Indiana Pacers, followed by a Sunday night clash against the Detroit Pistons.