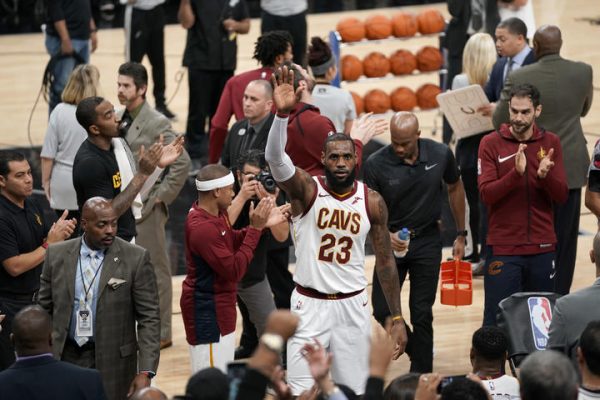 (San Antonio, TX) — Unable to mount a full comeback from a 29-10 opposing run resulted in the Cleveland Cavaliers‘ struggles continuing as they dropped a 114-102 decision to the San Antonio Spurs at AT&T Center on Tuesday night. The loss gives the Cavaliers six losses in their last seven games and 10 in their last 13 matchups.

The Spurs closed the first half with an 18-5 run before starting things back up after the break by adding an 11-5 surge to turn a 50-45 deficit into a 74-60 advantage. Cleveland would came off the ropes with a 19-8 run to make it a one-possession game, trailing 82-79 with 1:15 left in the third quarter. That was countered by the Spurs then scoring five of the final seven points to take an 89-81 advantage into the final 12 minutes.

The Cavaliers were unable to get any closer than four points during that final period, with a 10-3 run by the Spurs in the final five minutes of play sealing their fate. For the game, sloppy play proved to be fatal for the Cavs, who committed 18 turnovers on the night.

LeBron James entered the game needing only seven points to become only the seventh (and youngest) player in NBA history to score 30,000 points or more in a career. The milestone basket came near the end of the opening period, when his jumper with 1.1 seconds remaining connected.

James had a team-high 28 points, adding nine rebounds and seven assists. He was one of four starters who finished in double figures in scoring, with J.R. Smith held scoreless on the evening. James was joined by Isaiah Thomas‘ 14 points, Jae Crowder‘s 13 and a double-double from Kevin Love with 10 points and 11 rebounds.

Dwyane Wade‘s 12 points and six boards made him the only bench player to reach double figures on the night. Another reserve, Iman Shumpert, made his return following a lengthy injury layoff, playing just five minutes and collecting a rebound.

“I’m going to make a change,” Cavs head coach Tyronn Lue said after the game in reference to the team’s starting lineup, though he offered no hint as to what move would be made.

The first quarter began with neither team particularly sharp from the field, though both improved by the time the period had ended. The Cavaliers held the biggest lead of the quarter at 16-10, with mixed results on the defensive end. While the Spurs hit on just 1-of-8 on their 3-pointers during the quarter, they remained close by scoring on a number of easy baskets in the paint, with the Cavaliers taking a 29-25 lead into quarter number two.

The two teams would essentially trade baskets over the first seven minutes of the second period, with a pair of free throws from Thomas with 4:51 to go before intermission giving Cleveland that 50-45 lead. From that point, the Spurs closed out the half with the first portion of their run to take a 63-55 lead into halftime. One factor that hurt the Cavs during this quarter was in allowing the Spurs to hit 60 percent from the field during those 12 minutes.

“Some guys are just frustrated,” Lue said. “We’ve just got to stay together.”

The Cavaliers’ relatively quiet week will see the team return home for a Friday night matchup against the Indiana Pacers that will tip off just after 7:30 P.M. ET.