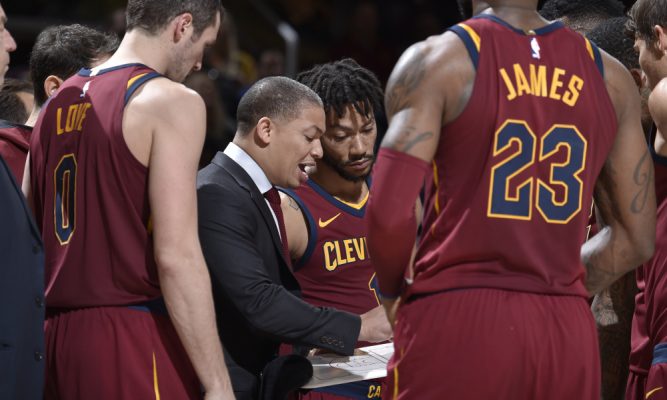 The Cleveland Cavaliers got a much-needed win on Thursday night, but it certainly didn’t offer any signs that the Cavs are past their recent struggles. After leading by as many as 23 in the second quarter, Cleveland found itself down with just 31.5 seconds left in the game before Isaiah Thomas was sent to the free-throw line to save his team from yet another late-game collapse.

Following the game, it appeared Cavaliers head coach Tyronn Lue was hardly satisfied with the win, and was far more focused on how easily Thursday’s game could have been the Cavs’ fifth straight loss.

According to Joe Vardon of Cleveland.com, Lue quietly let on that he is unhappy with how his team has been playing during his postgame press conference:

“Tyronn Lue doesn’t like to rip his players in public.

“Also, his new thing this season when he doesn’t want to answer a question is to say, instead, ‘I can’t remember.’”

Lue didn’t remember when he was asked simply whether or not he was upset with the players on the Cavs roster. Jump ahead to 1:30 to see Lue’s cryptic answer.

Despite the win, the near collapse is a sign that things simply are not clicking in Cleveland at the moment. It’s clear that finger pointing has begun within the organization and that likely won’t subside until the Cavs are able to right the ship.

Hopefully Lue is able to take his anger and use it to motivate his team to perform better in their upcoming matchups. If he can’t, the Cavs are sure to suffer many more losses by the time the 2017-18 season comes to an end.