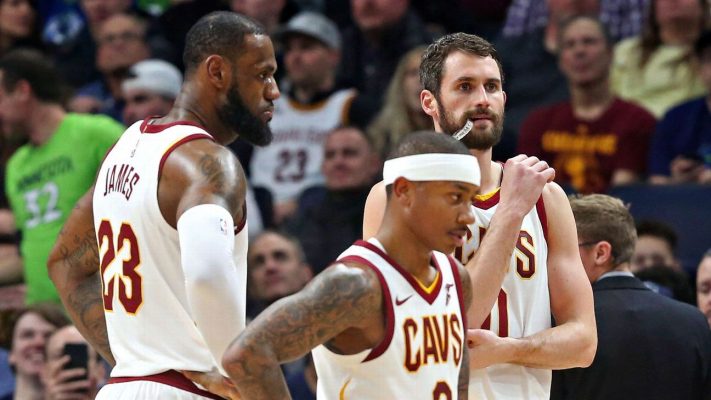 The Cleveland Cavaliers have certainly seen better days. They have lost seven of their last 10 games, and with an upcoming matchup against the defending champion Golden State Warriors, it could be quite some time until they finally break their current losing streak.

All that losing is seemingly having an impact on certain players’ confidence in Cavaliers head coach Tyronn Lue. According to Cleveland.com’s Joe Vardon, players are beginning to question Lue’s apparent reluctance to switch up the starting lineup.

“I’ve received several questions about Lue, both for this week’s column and over the past several,” Vardon wrote. “Most of them call for Lue’s head. Some, like yours, are more reasonable and ask about his lineup and rotation. I believe Lue will make a change with the starters (probably), but he doesn’t want to do it while the Cavs are losing. As a former player, he thinks making a change during a losing streak sends a message that it was one guy’s fault they lost. In the meantime, some players are wondering why Lue doesn’t using lineups that are more matchup based? When the Cavs are playing teams with big centers, players say, start Tristan Thompson at center and move Kevin Love back to the four. Other nights, start Jae Crowder at the four and Love goes to the five.”

Lue made multiple changes to the Cavs’ starting lineup earlier in the season. Since then he has stuck with the same starting five, made up of Love, Jae Crowder, LeBron James, J.R. Smith, and Jose Calderon, regardless of any potential matchup disadvantages. Isaiah Thomas has begun to appear in the starting lineup as he continues to recover from the hip injury that kept him out until early January, but he is being brought along slowly.

Whenever a team struggles, it is common for the fanbase to question the decisions made by the head coach. Reports that players are questioning Lue’s plan of action is something quite different. Still, for a team that has grown so accustomed to success in recent years, it isn’t all that shocking that members of the organization are reportedly starting to point fingers.

Surely a return to their winning ways would solve all of the issues that seem to be plaguing the Cavs at the moment. Hopefully that return comes soon.