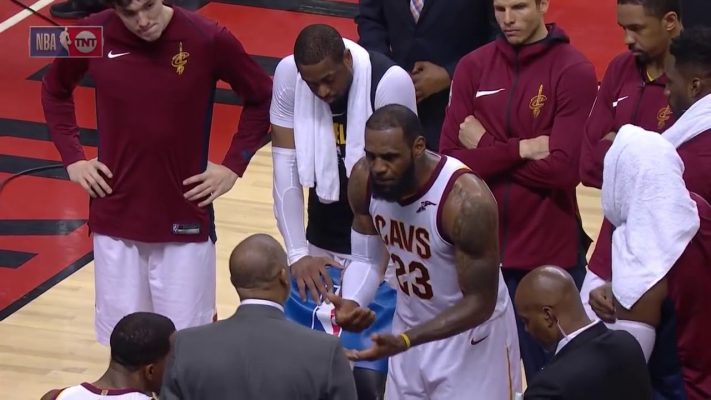 The Cleveland Cavaliers have undoubtedly struggled over the last couple weeks and have lost seven of their last 10 games. While many have pointed to the team’s lack of defense as the primary cause for their recent slump, it seems some on the team are pointing the finger at LeBron James.

According to Joe Vardon of Cleveland.com, some of James’ teammates have begun to complain that the four-time NBA MVP has recently been slowing down the game with his ball-stopping.

“Players have grumbled that James has slowed the ball movement, holding onto the ball until he sees an ‘assist’ pass, rather than moving it quickly,” he wrote.

If Cavs head coach Tyronn Lue has noticed a similar trend, it’s possible that he was referring to James when he told members of the press that his players need to abandon any personal agendas that might be getting in the way of collective success.

“I never really get concerned,” Lue said after the Cavs loss to the Toronto Raptors. “We’ve got to be better. We know that. But until we play better defensively, I think offensively sharing the basketball, everyone on the same page, and if guys have agendas, we’ve got to get rid of our agendas and play the right way.”

Perhaps James is beginning to worry about his team’s chances of winning an NBA championship this season and has decided to pursue personal glory. Perhaps he sees his team’s weaknesses and is trying to overcome them with his own masterful play. Whatever the cause, it seems his teammates are less than thrilled about it.

This team has proven they can win in bunches. They have also proven that they can easily lose their way and suffer a string of defeats. Hopefully, James and his teammates are able to put the recent negativity behind them and return their focus on their ultimate goal of bringing another NBA championship to Cleveland.