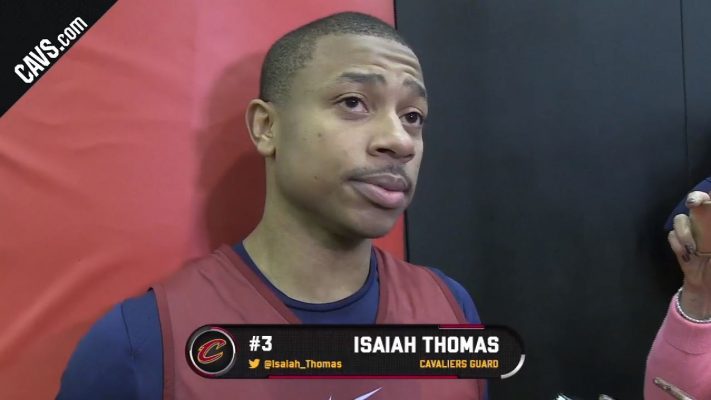 The Cleveland Cavaliers have been underperforming on defense this season. While they have enjoyed stretches of success despite that fact, they have also struggled through several losing streaks as well.

The Cavs have lost five of their last seven games, and the lack of defense has played a large role in all five of their recent losses. Though they are still sitting atop the Central Division, it is hard to imagine the Cavs achieving their lofty goals this season if their defense does not improve.

According to star point guard Isaiah Thomas, the team’s defensive woes have been a topic of conversation in recent practices.

“We watched film and you can just see it,” Thomas said. “Film doesn’t lie. We just gotta be more physical. We gotta be the aggressor on both ends of the floor. I think when we do that we’re a tough team to beat no matter who we’re playing, but when we don’t and we let teams do what they want offensively it’s tough, especially if you’re not hitting on the offensive end.”

Thomas also discussed the Cavs’ early-season winning streak in which the defense was noticeably improved. The All-Star guard thinks a return to that kind of play is only a matter of effort.

“Yeah I think it’s an effort thing. I mean when guys seen it on film today it was obvious. It’s definitely more of an effort thing because we’ve done it this season, we’ve shown we can be a pretty good defensive team,” he said. “I think once you see it on film you kind of look at yourself in the mirror like, ‘I can give a little more.’ Once everybody does that we’ll be fine.”

Even the best teams struggle at times and Cleveland still has more than enough time to turn it around.

Still, acknowledging the problem is only the beginning. The Cavs will get an opportunity to prove that they are committed to improving on the defensive end on Thursday night when they face off against one of the top offensive teams in the NBA in the Toronto Raptors.