Cleveland Cavaliers vs. Orlando Magic Game Recap: Too Much Firepower 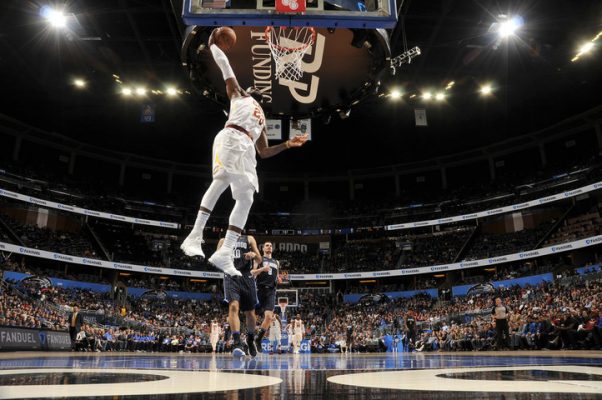 (Orlando, FL) — Bolstered by 79 points from the combination of LeBron James, Kevin Love and Isaiah Thomas, the Cleveland Cavaliers got back in the win column by knocking off the Orlando Magic by a score of 131-127 at Amway Center on Saturday night. That scoring punch helped hold off a fourth-quarter Orlando rally that made things tense in the final minute.

A 40-point third quarter eruption, coupled with solid defense that saw the Magic commit eight turnovers helped break open what had been a three-point game at the half, with the Cavaliers leading by as many as 23. On the offensive side, Love poured in 14 points during the period, while the Cavs as a team drilled seven 3-pointers to give the team a comfortable 107-87 lead.

“We played the game right, playing with pace and getting open looks,” Cavaliers head coach Tyronn Lue said about the third-quarter success.

James focused on the defensive side of the ball when asked about the success in the third quarter.

“We got stops and we executed,” James said. “We just locked down defensively and made them miss.”

Outscoring their opponents 40-23 during the third helped provide some cushion for the Cavaliers during that fourth quarter. The Magic cut the margin in half in the first 2:20 of the period, going on a 12-2 run, and then got their deficit down to three at 128-125 with exactly 40 seconds left.

“I think Coach (Frank) Vogel did a good job of going small against our second team,” Lue said of the fourth-quarter issues.

An airball by Thomas was then caught by Dwyane Wade and converted into a layup with 17.8 seconds to go, with Wade and James then clinching the game by combining a trio of free throws. One of the chief reasons for the Cavs’ slide in the final quarter was their nine turnovers.

James narrowly missed a triple-double with 33 points, 10 rebounds and nine assists, while Love finished with 27 points and five boards, hitting on six 3-pointers. The contest marked the first-ever start in a Cavs uniform for Thomas, who again made the most of his limited time on the court by finishing the night with 19 points and four assists in 21 minutes. A total of 12 of those points came during the pivotal third quarter.

“Once he gets his timing down, he’s really gonna help us,” Lue said of Thomas.

Speaking of Thomas’ potential to aid the Cavs, James also offered his insight.

“Throughout the rehab process, you don’t practice falling down, so it’s good that I’ve been able to get up without any problems,” Thomas said.

Wade came close to a double-double with 16 points and nine rebounds, while J.R. Smith was the only other Cavs to reach double figures, scoring 10 points. Wade’s scoring paced a bench that delivered 40 points, which included Tristan Thompson‘s nine points and seven rebounds.

“They just kept coming after us, they were hitting on all cylinders,” Love said immediately after the game. “We were able to get out of here with a win, but it wasn’t pretty.”

The Cavaliers return to action on Monday night with a road contest against the Minnesota Timberwolves set to tip off just after 8 p.m. ET.