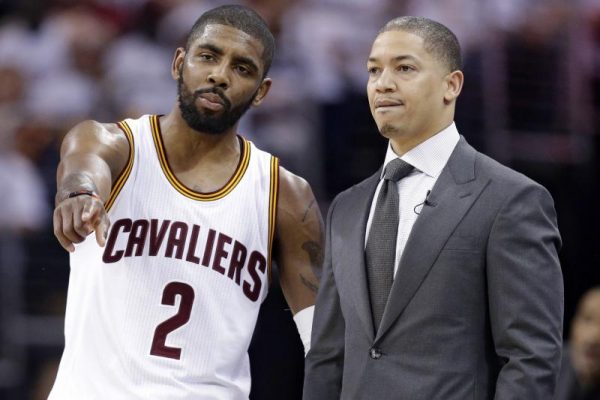 The Cleveland Cavaliers will travel to Boston to face off against Kyrie Irving and the Celtics on Wednesday, but if Cavaliers head coach Tyronn Lue had originally gotten his way, Irving would still be suiting up in the Wine and Gold.

“We wanted to figure out, is this real?” Altman said. “Is Kyrie someone we might want to bring back and say, ‘Hey, look, players have figured it out in the past. You’re going to figure it out. We’re going to still be really good, we’re going to be winning games, so it’s not going to be all awful.’ You know what I mean? So thinking about the parameters of that, the implications of that was something we were also always debating.”

Irving was ultimately sent to the Celtics in late August, but not before the Cavs received several picks and a slew of valuable players including All-Star point guard Isaiah Thomas, who made return from injury Tuesday night.

The trade has worked out wonderfully for Irving and the Celtics. Boston currently sits atop the Eastern Conference with a 30-10 record, and Irving is averaging 24.8 points and 4.9 assists per game.

Whether or not the trade can really be deemed a success for the Cavaliers is partly contingent on how well Thomas performs upon his return. If he returns to his All-Star form, it will certainly be a rare win-win scenario.

Altman admitted that it’s difficult to try and improve after trading away a player like Irving, but he also reflected on what kind of opportunities the surprise trade has offered the Cavs in the short and long-term.

“You can’t get better trading a four-time All-Star going into his prime and a 25-year-old point guard going into his prime,” Altman said, “but it gives you a unique opportunity to shuffle the deck and figure out long-term planning, but also figure out what goes around LeBron (James) that’s going to help us win a championship.”

After all that took place between Irving and the Cavs this summer, it is hard to imagine him still playing in Cleveland. One thing is certain, however, the trade has added another fascinating wrinkle to the rivalry that exists between two of the NBA’s best teams. If both teams should meet in the Eastern Conference Finals once again, the trade and its repercussions will be on full display.