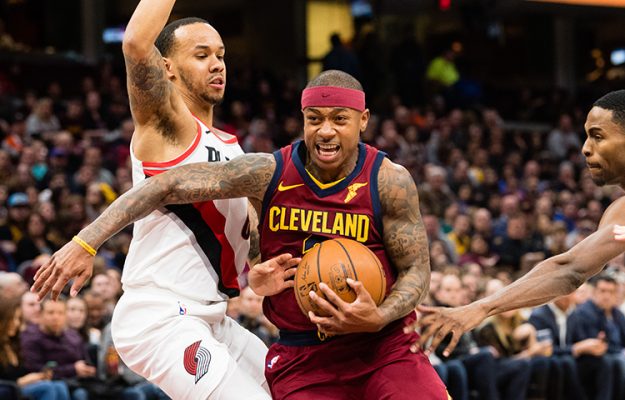 (Cleveland, OH) – A 27-8 fourth-quarter run by the Cleveland Cavaliers helped break open what had been a tightly contested battle against the Portland Trail Blazers and led to a 127-110 Cavaliers victory at Quicken Loans Arena on Tuesday night. The win, which broke a three-game losing streak, was also highlighted by a strong debut performance by Cavs point guard Isaiah Thomas, who played his first game after missing the team’s first 36 contests with a hip injury.

With the game tied at 91 with 11:22 left, the Cavaliers ran off 12 unanswered points and slowly put the game out of reach. During that surge, the Blazers missed six consecutive shots from the field and closed out the quarter shooting 38 percent from the field, compared to the Cavs’ 52 percent.

Thomas entered the game with 4:33 left in the opening quarter to a standing ovation and was able to show during his 18 minutes on the court what he can offer the Cavaliers. His first basket in a Cleveland uniform came with just over a minute left in the opening quarter and was quickly followed by a game-tying three-point play that closed out the scoring in the period.

“It was like I’d been here for five or six years,” Thomas said about the warm welcome he received from Cavalier fans.

By the time Thomas was done, he had scored 17 points on 6-of-12 from the field, including a trio of 3-pointers. He also contributed three of the team’s 28 assists on the night and even showed off his fiery personality by picking up a technical foul.

“I felt good, it felt like I was a rookie again,” Thomas said. “I’m just glad my shot was falling and I’m just so happy I’m able to play basketball again and I’m glad to be back.”

LeBron James again led the Cavs with 24 points, eight assists and six rebounds, while Kevin Love added 19 points and seven boards despite being under the weather. James was asked about the performance of Thomas:

“He did better than a lot of us expected,” James said. “What I like most about him is that he’s got a chip on his shoulder for life.”

Jae Crowder also tossed in 17 points, while Dwyane Wade and Jeff Green added 15 and 10 points, respectively, off the bench. Eight of Wade’s points came during that fourth-quarter explosion, with the veteran doing his scoring damage in just 17 minutes on the court.

“First game out to have 17 points in 18 minutes, it was good to see him out there,” Cavs head coach Tyronn Lue said of Thomas’ return.

The contributions of Thomas, Wade and Green were a key reason why the Cleveland bench was such a potent weapon, finishing the evening by delivering 61 of the team’s 127 points.

“I think our bench was great for us tonight,” Love said. “They were there to pick us up all game, especially in the fourth quarter.”

James offered a glimpse into what Thomas can provide for the Cavs over the rest of the season:

“He’s very dynamic, he can shoot the pill, get in the lane,” James said of Thomas. “He can create so much for us.”

Lue did issue a word of caution about expecting the same level of output from Thomas in the next few weeks:

“Tonight, he played under control,” Lue said. “First couple of weeks, there’s going to be ups and downs. It’s not going to be like this every night.”

The Cavaliers will be back in action on Wednesday night with a huge road matchup against the Boston Celtics on tap. Tipoff for that nationally televised game on ESPN will be just after 8 p.m.