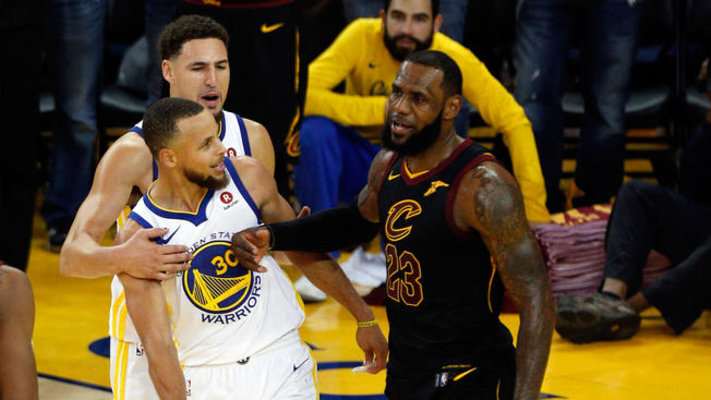 During the final minute of Game 1 in this year’s NBA Finals, the frustration felt by the Cleveland Cavaliers and their former star, LeBron James, was reflected in a brief moment of trash talking with Golden State Warriors point guard Stephen Curry.

The Cavaliers had watched a potential game-winning situation collapse in the closing seconds of regulation and trailed the Warriors by 11 points with approximately 35 seconds left in overtime. Curry attempted to add to that deficit, but James defiantly blocked the shot and punctuated the swat with some choice words directed at Curry.

While appearing on The Bill Simmons Podcast, Curry offered some insight into what took place:

Simmons: “He blocked you and he talked sh*t to you. I thought you guys were gonna fight.”

Curry: “It was never going to spill over to that. But it was an interesting moment … I was hot because I was trying to finish out a possession, I think it was less than a minute left, I didn’t see him coming over from the weak side so I tried to do a little soft scoop layup and he pinned it. Then he stared me down and he said something to me.

“And I was like, ‘That’s what we’re really on right now? We’re about to win and you’re worried about mean-blocking my shot and talking trash?’ And then the whole Tristan and Draymond thing happened and I went back up to him and I was like, ‘Yo, what’s up? Is this really what we’re about right now?’

“And he was like, ‘I gotta do that to make sure my teammates know I’m a mentor’ and it’s a part of his leadership and that type of deal. And I was like, ‘I don’t want to be the sacrificial lamb for your leadership.’ (laughter). Come on man, that’s messed up.”

Simmons: “I want more of it. I don’t want you guys to like each other. This is my biggest problem with this decade. I like that I’m not positive you and LeBron like each other (Curry starts laughing). Watching from afar, it doesn’t seem like you like each other. I’m sure there’s a mutual respect.”

Curry: “There’s definitely a mutual respect. I would say though when you see guys working out with each other in the summers and you see guys playing pickup and all that — when you step foot on the court during the season, it’s a totally different environment.

“Guys can be buddies and friends and whatnot and have whatever type of relationship they want to have in the summer and off the court, but the rivalry and competition and egos and all that stuff that lives in an NBA game and when you’re trying to hold that trophy … it’s really there and it’s not going anywhere.”

Simmons: “I don’t want you guys to get along. I want adverserial relationships.”

The “Tristan and Draymond thing” that Curry spoke of ended up being the more prominent aspect of those waning moments. That’s because the two players involved, the Cavaliers’ Tristan Thompson and the Warriors’ Draymond Green, nearly engaged in an on-court brawl. That heated interaction is something that’s continued to fester during the offseason.

The James and Curry chatter brought back more positive memories of Game 6 of the 2016 Finals, when James did the same thing. In that case, the Cavaliers won that game and then completed a stunning comeback from a 3-1 deficit to win Game 7 and the franchise’s first title.

Should any future interactions between James and Curry take place in the near future, it will come with James wearing a Los Angeles Lakers uniform, since he left the Cavaliers as a free agent on July 1. The move presumably puts an end to the two teams’ rivalry that saw them play in a record four consecutive NBA Finals.