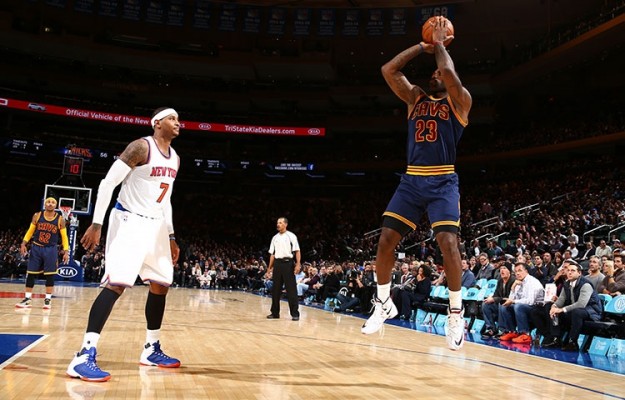 (New York, NY) – Taking over in the final minutes with six clutch points, LeBron James helped extend the Cleveland Cavaliers’ winning streak to eight in a hard-fought 90-84 victory over the New York Knicks at Madison Square Garden on Friday night.

The Cavaliers trailed 82-77 with 4:46 to play, but went on a 13-2 run down the stretch to improve their record to 8-1 on the young season. After a Cleveland free throw chipped a point off the deficit, James sparked the final surge when he went in for a layup, appearing to have been fouled with 2:51 to go, though no call was made.

A miss by New York, followed by a baseball pass by Tristan Thompson back to James resulted in a score just 12 seconds later to make it 82-80. Then with 2:05 left, James scored on a driving layup to knot the score before connecting on a turnaround jumper with 1:17 to play to give the Cavs the lead.

In the final minute, Mo Williams closed things out, first connecting on a jumper with 41.1 seconds left, breaking an 84-all deadlock. He then converted all four free throws in the final 18.1 seconds to clinch the contest. That effort seemed ironic since the Cavaliers had made just 14-of-27 free throws up to that point, numbers that nearly cost them the game.

In that fourth quarter, Cleveland clamped down on the Knicks, allowing only four field goals in 21 attempts. In the final 4:46, the home team made just one of seven attempts and also committed four turnovers. The most prominent second-half example of the team’s poor defensive effort was the night of Knicks’ star forward Carmelo Anthony. The veteran hit eight of his 10 first-half field goal attempts to finish with 22 after two quarters, but managed just four points the rest of the way.

James, who led all scorers with 31, notched 12 points in the final period, and was followed by Williams with 20, including nine in the fourth quarter. Despite his heroics on offense, James highlighted the need to continue the defensive effort:

“We locked down in the fourth quarter and hit some key shots,” said James. “It didn’t look good at first, but we got it done and we have to continue to play defense.”

“He knows when and where he needs to make an impact on the game,” said Blatt. “He knows what to do and he wants to win.”

Noting the continued contributions of Williams, Blatt spoke about how he’s been an integral part of the squad in the early going:

“He’s proved his value and we trust him out there on the floor” said Blatt.

Kevin Love acknowledged that the win wasn’t pretty, but also gave the team’s defense a good deal of the credit:

“There’s going to be nights when it’s an ugly win, and on those nights, we need to lean on our defense,” said Love.

Timofey Mozgov was the only other Cavalier to score in double figures with 11, while Love and Thompson paced the Cavs on the rebounding front with 11 and 10 on the night, respectively.

Blatt also spoke after the game about how the team was able to respond on defense to collect the victory:

“Desire and recognition of the situation,” Blatt said. “We played without our fastball, but that shouldn’t be the norm for us.”

The midway point of the Cavaliers’ brief three-game road trip comes tomorrow night when they travel to Milwaukee to take on the Bucks in a game set to tip off just after 8 p.m. ET.