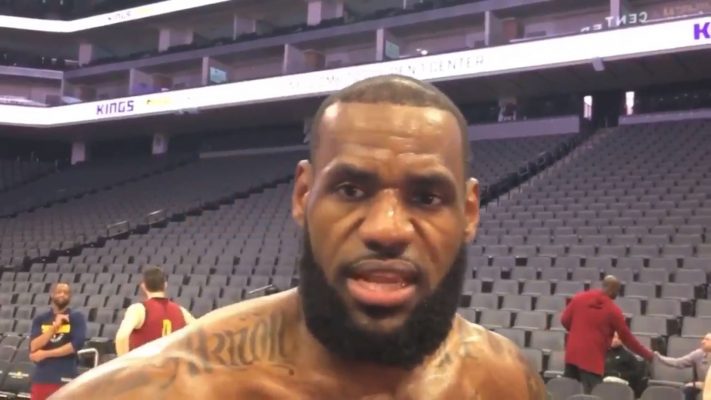 The lingering frustration felt by Cleveland Cavaliers forward LeBron James over a trio of non-calls in the closing moments of Monday’s 99-92 loss to the Golden State Warriors remains for the 15-year veteran. James spoke about those frustrations regarding NBA officiating and about the lack of fouls called on his behalf during the team’s Wednesday morning shootaround in Sacramento.

LeBron James detailed his frustrations with NBA officiating at shootaround on Wednesday… ? pic.twitter.com/1WVTZa3cH5

“For me, the worst thing is when I actually go and talk to the ref and they said, ‘It was nothing,'” James said. “Like I’d go over, ‘You didn’t see that?’ ‘No, I didn’t think it was anything, it was no call, no foul.’ That’s the worst for me. If he says, ‘I missed that one,’ or ‘maybe I wasn’t in the right position.’ But when you see the ref right there on the baseline looking at the whole play and you go up to them and they say there was no call, multiple times in the crunch time, that’s the frustrating part. For me, it’s even more frustrating because I know how I’m officiated at times.

“You got three referees that’s there that have been in the heat of the game all game and we’re allowing someone thousands and thousand of miles away to make a call that could be bang-bang because they have a different camera or whatever the case may be. The ref can see it…they know the call.”

On Tuesday, the NBA’s Last Two Minute Report, which looks at key officiating calls during the final two minutes of close games, found that James was fouled on three separate occasions by the Warriors’ Kevin Durant. However, no fouls were called on any of the plays in question, which came with the Cavaliers trailing 95-92.

James has put up MVP-like numbers for the Cavaliers, which has made him a strong candidate to win his fifth award in the category. Despite that lofty status, James has found himself going to the foul line an average of just 5.9 times per game. That’s the second-lowest number of his storied career, with only his rookie-year average of 5.8 lower.

The Cavaliers and James will face the Sacramento Kings tonight as part of the team’s three-game Western road swing, with concludes on Saturday night with a game in Utah.