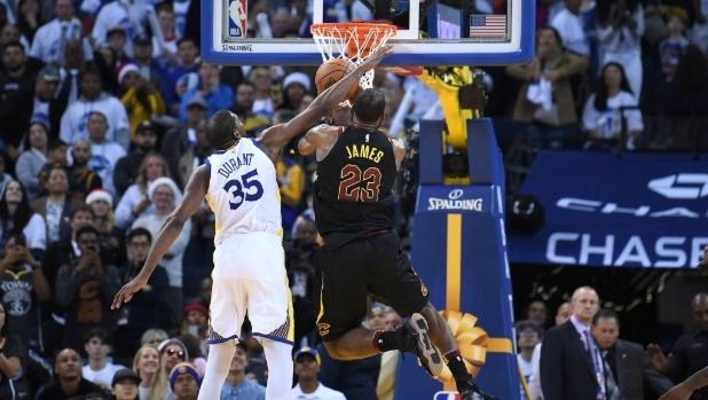 The final two minutes of any close game can bring with it controversial calls that require further explanation by the league. Such was the case with NBA’s Last Two Minute Report concerning the Cleveland Cavaliers‘ 99-92 loss to the Golden State Warriors on Christmas Day.

Two key plays, both involving Cavaliers forward LeBron James and Warriors forward Kevin Durant, were the source of much of the postgame controversy, with both players offering their differing viewpoints. The league’s ruling was that Durant could have been called for three different fouls, but ended up being charged with none, which gave the Warriors the game.

The first came with 1:12 left and the Warriors clinging to a 95-92 lead. The NBA ruled on Tuesday that Durant had made body-to-body contact on James, which caused the Cavs veteran to tumble out of bounds. The original decision was a no-call by officials.

Then, with James driving to the basket with 27 seconds remaining and the score the same, Durant again was later judged to have made forearm contact with James. Subsequently, with 25.6 seconds to go, the Tuesday ruling indicated that Durant also made enough contact with James’ arm and body to affect his driving shot attempt. In both instances, nothing was called and the original possession that was awarded to the Cavaliers was overturned.

Regardless of the league’s findings, nothing can be done to change the final result. The league’s policy in making such mistakes public is that “there must be clear and conclusive video evidence in order to make a determination that a play was incorrectly called.” Three mistakes in the span of less than a minute would seem to indicate some serious mistakes were made.

The two teams will meet again on Jan. 15 at Quicken Loans Arena, a game that will be broadcast nationally on TNT. As the 2017-18 season progresses, they’ll also be seeking to meet up again in the NBA Finals for the fourth consecutive year.