Cleveland Cavaliers vs. Golden State Warriors Game Recap: A Not So Merry Christmas 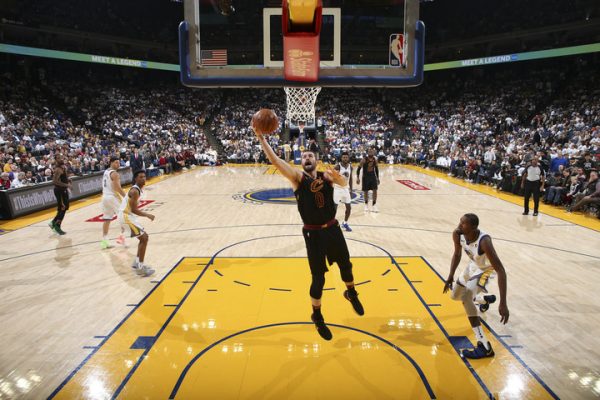 (Oakland, CA) – The Cleveland Cavaliers looked to avenge their 2017 NBA Finals defeat when they headed to the Bay Area to play against the Golden State Warriors on Christmas Day. The marquee matchup was a battle throughout and while both teams were missing superstars, with Isaiah Thomas waiting for his Cavs debut and Stephen Curry nursing a right ankle injury, the contest was as entertaining as fans could have hoped for.

The Cavs had a chance to win late in the game, but two questionable no-calls involving LeBron James and Kevin Durant had a huge impact on the final outcome as they lost in a nail-biter, 99-92.

“Initially, I saw an initial bump,” Cavaliers head coach Tyronn Lue said of the final questionable no-call following the game. “At the basket I thought it could have been clean, but on the initial bump. It could have went either way, but he didn’t call it so. It’s part of the game.”

The Cavaliers shot a dismal 31.8 percent from the field in the contest and after an especially cold start to the final frame, they had trailed by nine points with just over five minutes remaining.

It looked as if the game might’ve ended in a double-digit defeat, but Cleveland managed to turn it on offensively later in the quarter and brought the game back to a two-possession contest, 92-88. Dwyane Wade and James then scored on back-to-back possessions to tie the game up at 92-92 with 1:59 left in the game. Oracle Arena grew noticeably anxious as it seemed Cleveland was going to play the Grinch to the home crowd’s Christmas celebration.

On the Warriors’ following offensive possession, Klay Thompson hit a huge 3-pointer to put his team back up by three, but the game was far from over.

On the very next possession, the first of two late-game questionable no-calls was made when Durant reached for the ball while James was driving to the basket. While the replay seemed to show a clear foul, no whistle was blown and James was charged with a turnover.

The Warriors failed to capitalize on their following offensive possession and with 30 seconds left in the game, the Cavs were still down just three points. James dribbled down the court and made his move with 26 seconds left on the clock and in the span of one minute, the second questionable no-call was made.

The three-time NBA champ drove to the basket with Durant guarding him. James got around his defender, but the defending NBA Finals MVP followed closely behind before seemingly fouling James as he approached the basket. The whistle remained in the referee’s pocket and because James had touched the ball last, the Warriors regained possession of the ball. While the game’s announcers felt confident that a foul should have been called, no change was made and the packed arena began the “Warriors” chant that Cavs fans have grown to hate in recent years.

“He’s one of the leaders in shot blocks. They have a good, not good, but great defensive coach in Mike Brown sitting over there too. I know all about it,” James said of Durant’s defense before commenting on the no-call. “The overturned one, he fouled me twice. But, whatever. What are you going to do about it?”

The outcome was undoubtedly disappointing, but the game itself was wholly entertaining. Kevin Love put on a show in the contest with 31 points, 18 rebounds, and two steals despite the fact that he was sitting on the bench during the game’s final stretch.

While James recorded seven turnovers in the game, he had a productive night nonetheless and finished with 20 points, six rebounds, and six assists. He also added another dunk to his endless highlight reel when he drove into the lane in the first quarter to complete a monster jam.

James and Love led their team on both sides of the court, but the Warriors stars showed up in an equally impressive fashion. Durant finished the game with 25 points, seven rebounds, and three assists. Thompson added 24 points and seven rebounds, and Draymond Green recorded another one of his typical triple-double performances with 12 points, 12 rebounds, and 11 assists.

“It’s always great to play the Cavs, they’re an awesome team,” Warriors head coach Steve Kerr said following the game. “LeBron is so amazing and it’s so fun to feel the energy in the building when the two teams get together. Neither team will look the same as we will even a month from now because Steph and Isaiah Thomas both should be back, hopefully they’ll both be back. … But it doesn’t even matter sometimes, just the two uniforms in the same building gets people going.”

While there is certainly more weight attributed to these teams’ regular-season matchups, in the end it is just another game in a long NBA season. This loss gives the Cavaliers even more tape to study as they prepare for their next matchup just three weeks away. By that time, Curry and Thomas will likely both be fully healthy and NBA fans may get their first real taste of a 2018 NBA Finals preview.