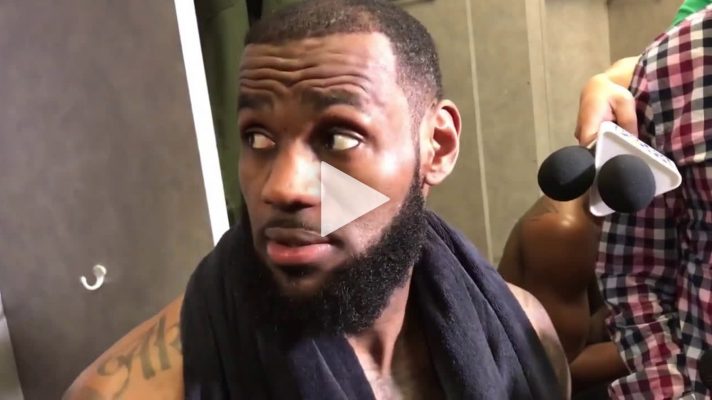 The controversial closing moments of the Cleveland Cavaliers‘ 99-92 Christmas Day loss to the Golden State Warriors were marked by a pair of non-foul calls on Warriors forward Kevin Durant. Both plays involved Cavs forward LeBron James driving to the basket and ending up on the short end of the call on each occasion.

During his postgame remarks, James was asked about the non-calls, specifically the latter one that came with 24.5 seconds remaining in the contest and Cleveland trailing 95-92. That one was originally ruled in favor of the Cavaliers before being overturned on review:

“I lost it on the left wing. He (Durant) got me a little bit, but I lost that one,” James said. “But the one, obviously the overturned one, he fouled me twice. But, whatever. What are you gonna do about it?”

Not surprisingly, Durant saw the plays from a decidedly different perspective:

James’ remark about Durant “getting him a little bit” was in reference to an apparent hip check that resulted in James losing control of the ball with 1:10 left in the contest.

The two teams were meeting for the third consecutive year on Christmas Day after having faced each other in the preceding year’s NBA Finals. The Cavaliers are hoping for history to repeat itself, with the losers of the preceding two holiday matchups having gone on to win that year’s league title. However, long before any potential fourth straight Finals battle gets underway, the two teams will meet again in Cleveland on Jan. 15.