Don't Miss
Home / Media / Report: Isaiah Thomas to Have No. 2 Jersey Retired by University of Washington

Report: Isaiah Thomas to Have No. 2 Jersey Retired by University of Washington 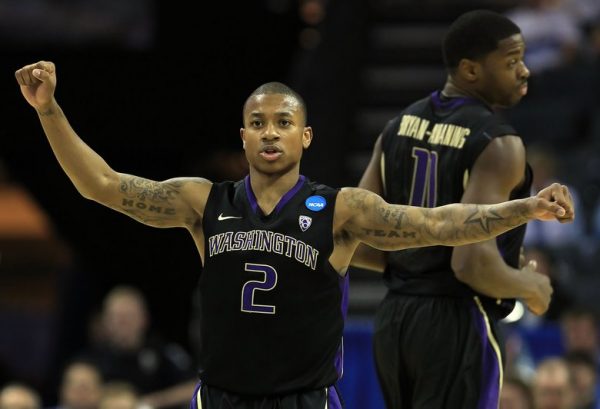 In a year of ups and downs for All-Star Isaiah Thomas, the Cleveland Cavaliers point guard is set to have his No. 2 jersey retired by the University of Washington. The retirement ceremony for Thomas’ jersey is scheduled for Feb. 15 when the Huskies host Utah.

Thomas, who is eighth on Washington’s all-time scoring list with 1,721 points, spent three years at the university before embarking for the NBA. During his collegiate career, the guard was named Pac-10 Freshman of the Year and took home first team All-Pac-10 honors twice. He will join Portland Trail Blazers All-Star Brandon Roy and Bob Houbregs as the only players to have their numbers retired by the school.

The 28-year-old couldn’t hold back posting on his social media after hearing the big news:

Despite having a sound college career, Thomas was the 60th and final draft pick in the 2011 NBA Draft. All odds were stacked against the 5-foot-11 guard, however the journeyman shined in stops with the Sacramento Kings, Phoenix Suns and Boston Celtics. The six-year pro has career averages of 19.1 point and 5.2 assists in the association.

Before the season started, the Cavs dealt Kyrie Irving, the first pick in the 2011 NBA Draft, to the Celtics for a package headlined by Thomas. Many considered the deal a clear win for Cleveland as the veteran was the third leading scorer in the NBA and finished fifth in MVP voting last season, both marks ahead of former MVPs like Stephen Curry and Kevin Durant.

Unfortunately, a hip injury has prevented the two-time All-Star from playing for Cleveland yet. However, good news surfaced this week that the dynamic scorer was targeting a return on the Cavs’ upcoming three-game road trip.

The Cavaliers will be back in action against the Utah Jazz at home on Saturday night.