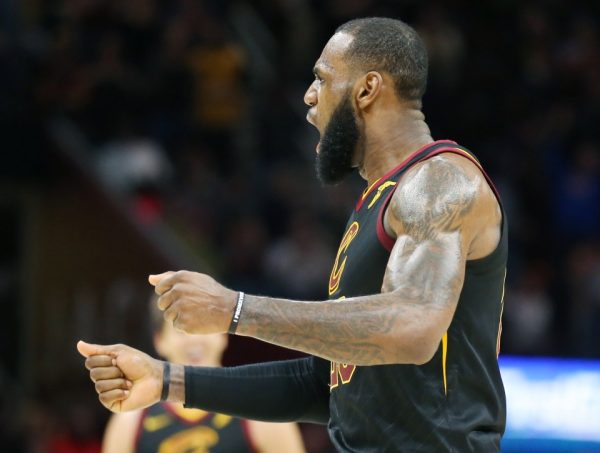 (Cleveland, OH) – Another clutch performance down the stretch by LeBron James helped the Cleveland Cavaliers escape a determined upset bid by the Sacramento Kings with a 101-95 victory at Quicken Loans Arena on Wednesday night. The win was the 13th straight for the Cavs, matching franchise records set in both 2009 and 2010.

The Cavaliers trailed by as many as 14 during the third quarter and were in danger of falling behind by four points with less than three minutes remaining in the game. However, James’ block of a George Hill shot led to a pair of free throws from Jeff Green to tie the game at 93. James then drove the lane for a score with 1:35 to go to give the Cavs the lead for good. Finally, with 15.8 seconds left, James connected on a fadeaway 3-pointer to clinch the win.

“It was a one-possession game and we were coming out of a timeout with a set play,” James said immediately after the contest. “But I want the ball in my hands at all costs and my teammates believe in me.”

Veteran sharpshooter Kyle Korver had sparked Cleveland to start the fourth by hitting a trio of 3-pointers in the first 90 seconds to give them the lead. Still, Sacramento aggressively battled throughout the contest, managing to collect 15 steals on the night and forcing James into what’s almost become a nightly display of heroics.

“I had some good looks in the first half, but they didn’t go down,” Korver said. “In the fourth, those types of plays tend to get a team going.”

During that final quarter, the Cavs bench scored 21 of the team’s 28 points. While this unit was outscored by the Sacramento counterpart for the game, Cleveland head coach Tyronn Lue lavished it with praise during his postgame press conference.

“They’ve been unbelievable for us, they’ve got great chemistry and they just know how to play the game,” Lue said.

James and Kevin Love each contributed double-double efforts to the Cavalier offense, with James narrowly missing another triple-double by scoring 32, grabbing 11 boards and dishing out nine assists. Love chipped in with 18 points and 13 rebounds, with Green’s 17 points and Korver’s 15 rounding out the Cavs who tallied in double figures.

“We just kept our poise and we have a lot of savvy veterans,” Love said. “We made shots when we needed them.”

After a consistently solid performance during their Monday night victory in Chicago, the Cavaliers’ first-half play offered up a flat effort. The Kings managed to collect just over half of their 57 first-half points in the paint, with the Cavs struggling to get back on defense.

“We were a little sluggish to start,” James said. “We just had to change our mindset.”

Cleveland actually outshot Sacramento during the opening period, yet the visitors had held a 22-19 lead when the quarter ended. The Kings then warmed up in the second by hitting on 67 percent of their shots from the field.

“There wasn’t a lot of energy,” Lue said about the Cavs’ first-quarter performance. “We just didn’t have a lot of pop.”

During the first half, the Cavaliers held three brief leads that collectively lasted just over a minute, with Green’s layup with 6:30 left before intermission giving the Cavaliers their final lead of the half. The Kings then put together a 23-12 surge to head to halftime with a 57-48 advantage.

“We could tell early, this was going to be an ugly game,” Dwyane Wade said. “What you have to do is find a way to win the game and we were able to do that.”

Sacramento scored the first five points of the third quarter to take its largest lead of the night at 62-48. It was then that the Cavaliers spent much of the remainder of quarter chipping away at their deficit. The final two of James’ 13 points in the period sliced the margin to a single point, but the Kings scored the final four to give them a 78-73 lead entering the final quarter.

“It was a tough game, you have some of these every year, so you just have grind it out,” Lue said. “In the second half, were were more locked into what we wanted to do.”

The Cavaliers will look to go for the franchise record for consecutive wins when they travel on Friday night to face the Indiana Pacers. That road matchup will also put the Cavs’ franchise-tying seven-game road winning streak on the line. Tipoff for that game will be just after 7 p.m. ET.