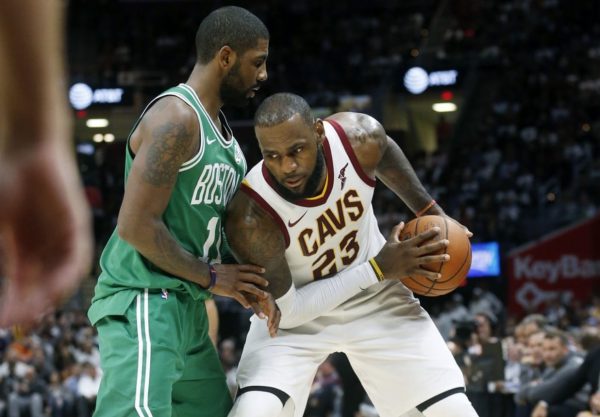 (Cleveland, OH) — Needing some late heroics from LeBron James and Kevin Love, the Cleveland Cavaliers escaped with a 102-99 season-opening victory over the Boston Celtics on Tuesday night at Quicken Loans Arena. The win came after the Cavaliers had watched an 18-point third-quarter lead completely disappear, which resulted in a 98-95 deficit with less than two minutes left in the game.

Love’s two free throws with 1:43 to play were followed by a James layup with 1:19 left to give the Cavs the lead for good at 99-98, with James then forcing a turnover. With just 46 seconds left, Love hit a 3-pointer to provide the Cavaliers with a four-point cushion, but a technical free throw from new Celtic Kyrie Irving and a three-point miss by James allowed for a last-second three-point attempt by the Celtics that came up short to end the game.

“We knew they were going to get a switch and we knew that [Al] Horford was going baseline side. So either ‘Bron had the small or we had the screen for the crosscourt to Kevin,” Lue said. “LeBron made a great pass and Kevin made a big shot. I have to do a better job of getting Kevin more involved in the offense.”

James collected a double-double with 29 points and 16 rebounds, narrowly missing a triple-double by adding nine assists. Meanwhile, Love had a double-double of his own with 15 points and 11 boards, with Derrick Rose adding 14 points, four rebounds and two assists. Others scoring in double figures for the Cavs included Jae Crowder with 11 points and J.R. Smith with 10.

Despite his huge night, James spoke about his lack of conditioning over the past few weeks, one effect of his ankle injury that limited him to one preseason game.

“I’m out of shape for my expectations. I don’t like where I’m at now,” James said. “But the important thing is that we got the win.”

Boston had been sent reeling in the first quarter following a devastating injury to Gordon Hayward just 5:15 into the game. Hayward’s injury came when he was attempting to score on an alley-oop, but after landing awkwardly, he was taken off the court with what was originally thought to be a broken leg. However, the official diagnosis came before halftime that Hayward had suffered a fractured left ankle, meaning that he’ll miss an extensive period of time after having signed a four-year, $128 million contract this past July.

At the time of Hayward’s injury, the Celtics led 12-9, though the severity of it took a toll on their fortunes for the remainder of the half. With Hayward in the game, the Celtics had connected on 50 percent of their shots from the field, but for the rest of the first two quarters, that shooting percentage dipped to just 29 percent (10-of-35).

Lue wasn’t aware of Hayward’s status during his postgame press conference, but expressed sympathy for his plight.

“It’s very difficult. Even though he’s on the opposing team, we’re still a fraternity, we’re still brothers,” Lue said. “You never want to see anyone get injured or go down like that. I wish him well. He’s been a great player in this league, an All-Star, a great model citizen as far as the NBA is concerned.”

In the final 4:05 of that opening period, the Cavs turned the game around, using a 14-2 run to turn a two-point deficit into a 29-19 lead entering the second quarter. They extended the margin to as many as 18 at 48-30, following a layup with 3:40 left before halftime. James was a key facet of that surge, collecting 10 points during the period, with the Cavs eventually holding a 54-38 lead.

After the Cavaliers took a 61-43 advantage with 9:57 left in the third, the momentum dramatically changed as the Celtics caught fire and the Cavs went cold. Connecting on 62 percent of its shots from the field, Boston actually took a lead in the closing seconds to complete a 28-8 run before Rose wrested it back on a 3-pointer at the buzzer to make 72-71. The chief reasons for the Cavaliers’ slide were due to their 32 percent shooting during the period and their eight turnovers.

The Celtics then took multiple leads in the final quarter before falling victim to the combination of James and Love.

“They cut it down, but D. Rose’s shot at the end of the third quarter was huge,” James said. “We found a way to win and that’s what good teams do. Right now, we’re just okay, but there’s a long way to go and I like it.”

Hayward’s injury not only cast a pall on the highly-anticipated matchup, it overshadowed the return of Irving who had asked for a trade during the offseason. Irving finished with 22 points and 10 assists after being greeted with plenty of boos from Cleveland fans during pregame introductions.

“Our execution on the fly wasn’t that good, but down the stretch, they executed,” Lue said. “Last year, this was a game we would have lost, so this is a good start for us.”

The Cavaliers will be off until Friday night, when they travel to face the Milwaukee Bucks in a game that will be broadcast nationally on ESPN, with tipoff set for just after 7 p.m.