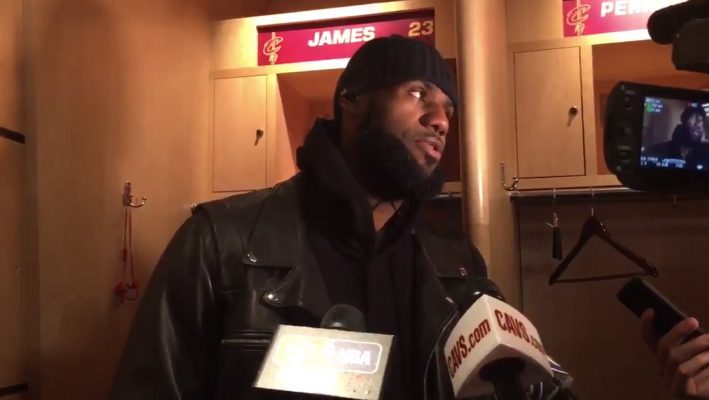 The news that Cleveland Cavaliers point guard Derrick Rose would be evaluating his future in basketball delivered a jolt to the organization that was hoping he’d be able to return within the next few weeks from nagging ankle problems. After Friday night’s home victory over the Charlotte Hornets, the trio of LeBron James, Dwyane Wade and Channing Frye reflected on the news.

“It’s easy to criticize someone when you…at the end of the day my favorite quote of all-time is Theodore Roosevelt‘s ‘Man in the Arena,'” James said. “You guys, if you don’t know about it, read it. It’s my favorite quote. Anybody can sit outside the arena and criticize the man in the arena that’s giving his blood, sweat, and tears. You know, but until you walk in the face of the line of battle or adversity or whatever the case may be, you don’t understand.

Roosevelt delivered the speech in France in 1910, with the following passage being what James referenced:

“It is not the critic who counts; not the man who points out how the strong man stumbles, or where the doer of deeds could have done them better. The credit belongs to the man who is actually in the arena, whose face is marred by dust and sweat and blood; who strives valiantly; who errs, who comes short again and again, because there is no effort without error and shortcoming; but who does actually strive to do the deeds; who knows great enthusiasms, the great devotions; who spends himself in a worthy cause; who at the best knows in the end the triumph of high achievement, and who at the worst, if he fails, at least fails while daring greatly, so that his place shall never be with those cold and timid souls who neither know victory nor defeat.”

Meanwhile, both Wade and Frye spoke about the possibility that Rose could end up retiring:

Dwyane Wade and Channing Frye on the Derrick Rose situation, to ESPN: pic.twitter.com/ofaM70sEzy

Rose has been plagued by injuries over the past five years, though a torn ACL had served as the main problem prior to his joining the Cavaliers during the offseason. His 2012 ACL injury came just one year after he was named league MVP, but his continued struggles led him to accept a veteran’s minimum contract from the Cavaliers in order to try and build back up his market value.

The ankle injury came in this season’s second game on Oct. 20, when Rose was virtually clotheslined by Greg Monroe, who was playing for the Milwaukee Bucks at the time. Rose landed awkwardly and has been able to play in just five games since.