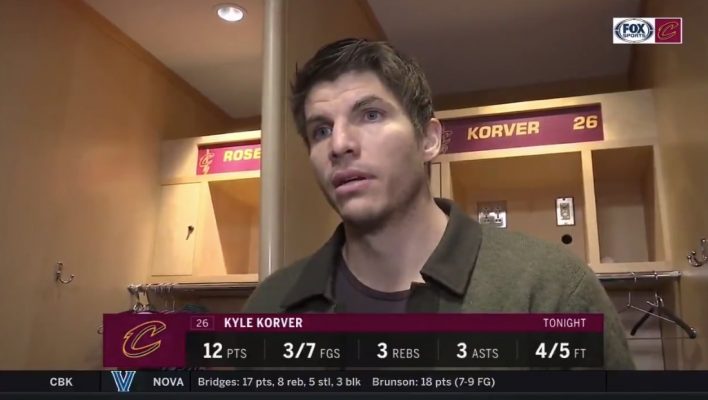 LeBron James is known for winning basketball games in many different ways, and so far during the 2017-18 season, one of the ways James is helping the Cleveland Cavaliers turn their season around is with his stellar three-point shooting.

Through 18 games, James is averaging 43.6 percent from three on the season, and an incredible 53.1 percent from beyond the arc in the last five games. It’s one of the reasons the Cavs are currently enjoying a six-game winning streak and it’s been so impressive that famed Cavs sharpshooter Kyle Korver has taken notice.

When Korver is impressed with your shooting you know you must be doing it right, @KingJames. ?

“Yo, my man has worked his way into being a real shooter,” Korver said following the Cavs’ victory over the Brooklyn Nets. “Like for real, he can really shoot. His fundamentals, he has worked on it in this last year that I’ve been here. I just think that his shot is really, really good. You can tell he thinks about it. He studies the game, he studies his own mechanics, he puts in a ton of time, and he’s confident shooting that shot. I think he’s doing a good job of mixing up when to attack the basket and when to shoot, but he knows when his shot is gonna be there and when he needs us to take it and it looks really, really great to me, and I watch these things. He’s worked hard, and it’s showing.”

While no one can doubt the mastery that James possesses on the basketball court, three-point shooting has been a relative weakness for the four-time NBA MVP. It’s no surprise that James has been able to once again augment his game to become an even more dangerous player for the Cavaliers, but that doesn’t make it any less impressive.

James will look to build on his impressive numbers from deep when the Cavs take on the New Orleans Hornets on Friday night.