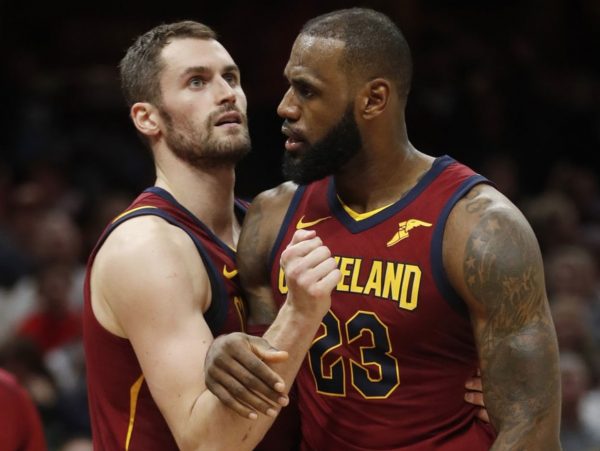 (Cleveland, OH) — LeBron James scored 23 of his points 33 on the night during the fourth quarter to help the Cleveland Cavaliers hold off a determined upset bid by the Brooklyn Nets in a 119-109 win at Quicken Loans Arena on Wednesday night. The victory extends the Cavs’ winning streak to six games.

James had scored just 10 points during the first three periods and had added six more with just under 4:30 remaining in the contest. At that point, he tallied the next 18 points for Cleveland, which was clinging to a 100-99 advantage when the eruption took place. By the time that stretch had ended with 55.6 seconds left, James had outscored the Nets 18-8 to put the game on ice and capped his individual surge with a 3-pointer.

Having left the game with 9:30 left in the third quarter after sustaining a hit to the mouth, James returned after receiving stitches to find the Cavaliers trailing by a 69-62 score. The Nets maintained that seven-point advantage at 76-69 with just under two minutes left in the quarter, but allowed the Cavs to run off eight unanswered points before splitting a pair of free throws in the final second of the third to deadlock the game at 77 with 12 minutes remaining.

“It was good because I had told him during halftime he was messing around and he didn’t like it,” Cavs head coach Tyronn Lue said about James’ injury. “I thought he in the second half, he got in the paint and played downhill. He was aggressive.”

Both Kevin Love and Dwyane Wade ended their evenings with 18-point efforts. Love picked up another double-double by contributing 10 rebounds to the Cleveland cause, while Wade dished out five assists.

“Him being on the second unit, he’s able to lead them and get in a rhythm,” Lue said about Wade.

Rounding out the double-figure scorers for the Cavs were Jae Crowder, who tossed in 14 points, and Kyle Korver adding 12. Crowder’s effort continued an impressive streak, with the Cavaliers now a spotless 8-0 on the year when he scores 10 points or more.

“It helps when I’m aggressive because it gets everyone going,” Crowder said.

The Cavaliers looked to be continuing their success of Monday night during the middle of the first quarter, putting together a 12-2 run to take a 16-7 lead. However, Brooklyn ran off eight of the next 10 points and managed to whittle the margin to three points at 20-17 by the time the period had ended.

Defensive lapses and sloppy play on both sides during the second quarter saw both teams combine for 15 assists and 10 turnovers, numbers resulting in each squad trading the lead during the final five minutes before halftime. That back-and-forth action came after Cleveland watched its 36-29 advantage disappear after eight unanswered points by Brooklyn. When intermission had arrived, the Nets held a 46-45 lead.

During that third quarter, the Nets managed to shoot 75 percent from the field (12-of-16), helping build their lead to as much as seven. However, they missed a golden chance to take control of the game by committing nine turnovers during the period and allowing the Cavaliers to hit from the field at a 57 percent rate.

“It was a tough matchup, but we found a way to win the game,” Lue said.

The Cavaliers will be off for Thanksgiving, but return to Quicken Loans Arena for a Friday night matchup against the Charlotte Hornets. Tipoff is set for just 8 p.m.