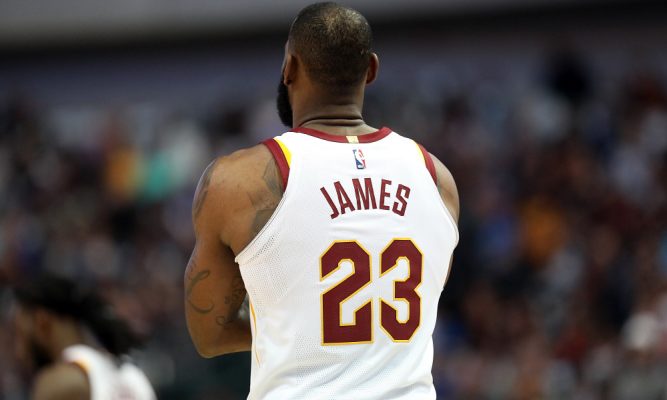 LeBron James indulged in a little pregame trash talk when he took a shot a Phil Jackson leading up to Monday night’s game against the New York Knicks.

Following the Cavs’ 111-104 victory over the Dallas Mavericks, James said that Mavs guard Dennis Smith Jr. should have been drafted by the Knicks. He later added that he was indicating that former Knicks team president Phil Jackson had made a mistake in the draft.

“Oh yeah, it was definitely a shot at him, that’s for sure,” James said when asked if his comments were directed at Jackson.

While James tried to make it clear that his comments were not about the Knicks organization itself or its first-round draft pick Frank Ntilikina, big man Enes Kanter didn’t hold back when addressing James’ comments.

Now, with just hours to go until the two teams take the court, James has once again stated that he was not trash talking either the Knicks or Ntilikina. He did however, take some time to take a shot at Kanter.

“I wasn’t throwing shade at Frank at all. People that got their panties in a bunch and things of that nature in New York. They look for any controversy there. I was basically stating what I saw in Dennis Smith and what I saw from him and him coming out and watching the draft and I thought that he would be a great fit here with [Kristaps] Porzingis,” James said. “That’s not to say Frank won’t be a great fit. I haven’t seen much of him. I knew about him from my best friend, who I went to high school with who actually played with him overseas the last couple years. It’s all that is for clarification of people who just live in a box and for Enes Kanter who always got something to say. I don’t know what’s wrong him.”

After clapping back at Kanter, it’s a fair assumption that the Turkish national will be coming after James on Monday night. However, history has proven that coming after the King is rarely a good idea, and James will be as motivated as ever to help secure his team’s third win in four games and get back to .500 on the season.