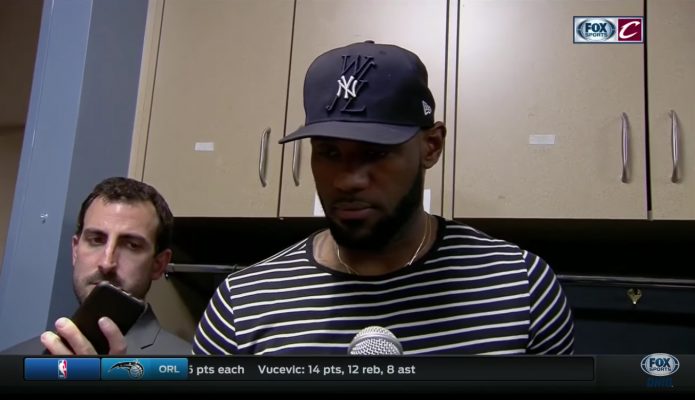 The frustration of Cleveland Cavaliers forward LeBron James was evident after a largely forgettable performance by the team on Wednesday night in its 126-113 loss to the Denver Nuggets. James’ comments were directed at certain members of the team and their level of toughness with the start of the postseason now less than a month away.

“It ain’t about a group. It’s about individuals,” James said. “Everybody got to just be more, do more. Ain’t about no group. You can’t preach toughness. Got to have it.”

James himself finished the game with 18 points, six rebounds and five assists in 34 minutes. While not happy with his own performance, he spoke about the toughness factor from his perspective:

“Personally? I had opportunities where I could have been better. One thing about it, I always bring toughness to the game. I know that. That’s for sure.”

During the game, the Nuggets scored 70 points in the paint and racked up 33 assists. They also withstood a third-quarter comeback by Cleveland that saw Denver’s 20-point lead drop to just five points. However, that surge was short-lived and the Nuggets responded with a 15-3 run that effectively put the game out of reach.

Cleveland center Tristan Thompson’s quiet night played a role in Denver’s freedom to roam the paint, with Thompson aware of what needs to be done moving forward:

“When it comes to toughness, that’s an area that I’m definitely going to look at and take very seriously,” said Thompson.. “Because at the end of the day, I’m the man in the middle, so I got to make sure I bring that toughness, and if it’s being questioned, I got to pick that shit up.”

James’ remarks were somewhat reminiscent of his earlier frustration following a loss to the New Orleans Pelicans on Jan. 23. That criticism was directed at team management for not getting players to build the squad’s depth, with a number of new additions having since joined the team. In the aftermath of those remarks, the Cavaliers won 10 of their next 13 games.