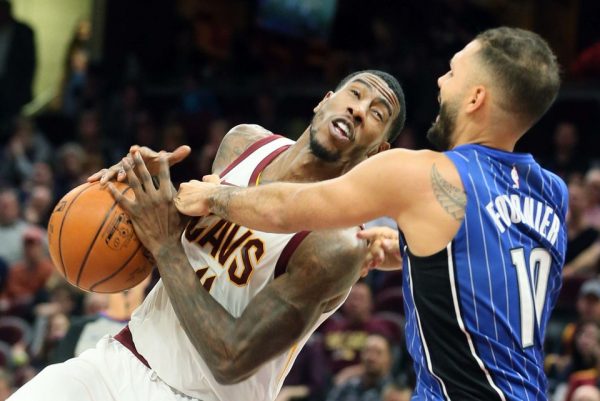 (Cleveland, OH) — The combination of a slow start and being on the wrong end of a 19-2 third-quarter run sent the Cleveland Cavaliers to their first loss of the 2017-18 season, dropping a 114-93 contest to the Orlando Magic at Quicken Loans Arena on Saturday night. The defeat snapped a 17-game Cleveland winning streak against Orlando, a span of nearly five years.

LeBron James was just one of the three Cavaliers players to score in double figures, notching 22 and grabbing four rebounds. Kevin Love tossed in 19 and came close to a double-double with nine rebounds, while Iman Shumpert scored 21 points and hauled down seven rebounds off the bench.

“They were playing at a different speed than us, we couldn’t keep up with them,” Cleveland head coach Tyronn Lue said during his postgame press conference.

Orlando scored the first eight points of the contest, then kept building their lead for the remainder of the first quarter. The chief reason for the latter circumstance was the ice-cold shooting of the Cavs, who missed 11 of their first 13 shots from the field.

The Magic led by as many as 21 before they ended the period with a 36-18 lead, using the 3-pointer as their main weapon by nailing eight long-range shots and shutting the Cavaliers out in that category. By the time the game had ended, Orlando had drilled 17 long-range bombs for the night.

“They came out moving the ball and came out making threes,” Dwyane Wade said.

That huge first-quarter advantage might have been even worse without the presence of James on the court, who scored 14 of the team’s 18 points and hit on 6-of-8 from the field in the opening period. In contrast, his teammates managed to only hit on 11 percent (2-of-18) of their efforts in that area.

Love did give the Cavaliers a boost on the offensive side in the second quarter with 13 points, though the Magic took their biggest lead of the game less than three minutes into the period at 42-20. From that point, the Cavs were able to cut the margin in half and trailed 56-45 at intermission.

“They came out fearless and punched us in the mouth in the first quarter,” Love said. “There’s a lot of things we have to clean up.”

Though Orlando scored seven of the first nine points to start the second half, Cleveland charged back with eight unanswered points to slice the margin to seven at 65-58. Momentum had appeared to be shifting after a James block of D.J. Augustin‘s layup attempt was instead converted into a 3-pointer by Wade.

However, that turned out to be a mirage as the Magic went on their 19-2 run to effectively end the game and take an 88-64 lead into the final quarter. Things got even worse in the fourth, with Orlando taking as much as a 37-point lead at 106-69, which resulted in Lue emptying his bench in garbage time.

“We’re not the team we want to be, so we’re going to have games like this early on as we try to figure it out,” James said. “They just had more energy than us.”

Another key reason why the Magic were able to dominate for much of the contest was their steady ball movement. Over the first three quarters, they collected 24 of their 28 assists on the night, while the Cavs at the same point managed just 11 of their 15 on the evening.

“When they got off to that hot start, they got early confidence and it was hard to put them out,” Lue said. “I thought they outplayed us. They kicked our butt.”

The Cavaliers will be off until Tuesday night, when they host the Chicago Bulls in a game that will tip off just after 7 p.m. ET.