Video: J.R. Smith Addresses Whether He Will Come Off Bench for Dwyane Wade 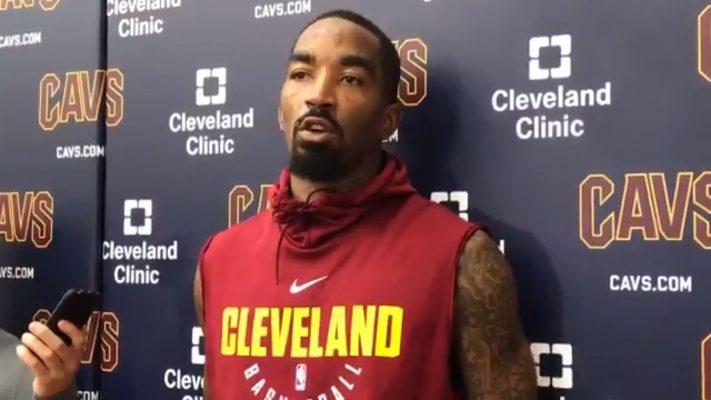 When news broke that Dwyane Wade had officially joined the Cleveland Cavaliers, eyes immediately turned to the shooting guard position.

Many have already asked whether incumbent starter J.R. Smith would continue control of the position, or if he would move to a supporting role to let Wade start alongside LeBron James. According to Ben Axelrod of WKYC, however, Smith is one person who isn’t concerned about who will claim the starting job.

Smith met with reporters after Thursday’s practice and discussed a possible competition with Wade.

“I’m not going to get into a blank measuring contest with Dwyane Wade,” Smith said. “I’m not gonna win that.”

Smith added that in the end, the decision is out of his hands.

“That’s a coaching decision, however it works out. If anything, it makes us stronger, whether if I come off the bench or if he (Wade) comes off the bench,” Smith told reporters. “As far as I know, I’m still in the starting lineup but I don’t really focus on it. This is my 14th year, and I’ve had a lot of BS in my past, and I don’t plan to bring that onto the Cavs.”

See Smith’s answer in his own words below.

This is the exact answer any Cavs fan would have hoped to hear from Smith. While he has certainly had moments of distraction during his 14-year career, Smith’s attitude towards Wade’s signing is another clear sign that playing for the Cavs has not only helped Smith grow as a player, but as a person as well.