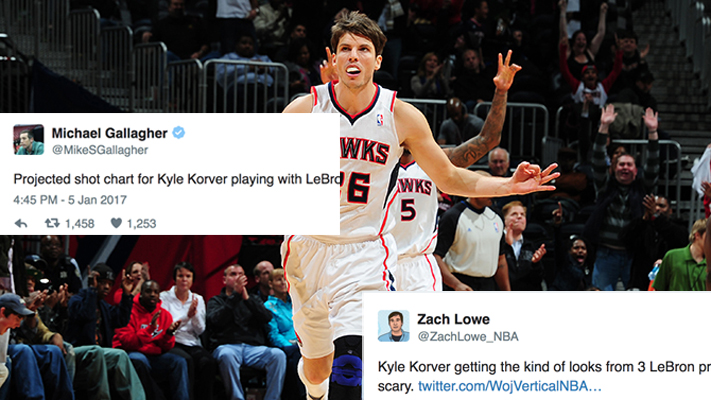 The Cleveland Cavaliers are in the final stages of acquiring sharpshooting forward Kyle Korver of the Atlanta Hawks and with LeBron James at the helm, the whole basketball world knows how dangerous this move is going to make the defending champions.

The 6’7″ Korver was likely signed to replace the injured J.R. Smith and it is now being reported that the Cavs are sending a 2019 protected first-round pick and forward Mike Dunleavy to Atlanta in exchange for the sharpshooter.

Cavs will be sending 2019 protected 1st to Atlanta and Mike Dunleavy in deal. sources said.

Take a look below at some of the best reactions to the blockbuster signing.

Kyle Korver getting the kind of looks from 3 LeBron provides is scary. https://t.co/BVl0rDZesi

Gotta think the Hawks are gonna really tear down now. You don’t go “Oh, the Cavs are the one team we can’t get past. I know, give ‘em Kyle"

Kyle Korver is shooting 54.4% on unguarded catch and shoot jumpers this season (76.3 eFG%)
Think he's gonna get a few of those on the Cavs?

The Cleveland Cavaliers are second in the NBA in 3-pointers made per game and 3P% WITHOUT Kyle Freaking Korver.