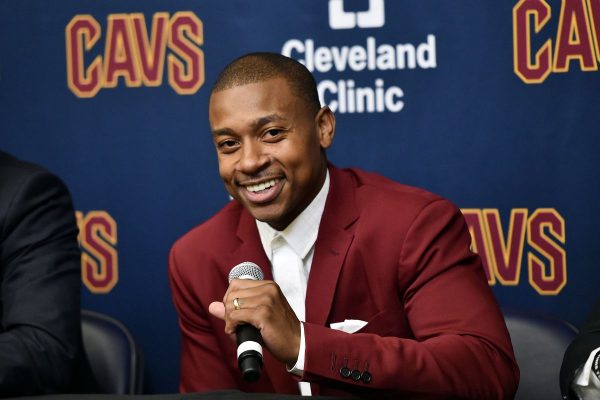 Reports and rumors regarding Cleveland Cavaliers point guard Isaiah Thomas‘ injury recovery have left fans with little concrete information for when he may take the court this season. Based on a recent report, however, Thomas may be taking the court much sooner than previously believed.

On Monday, cleveland.com‘s Joe Vardon reported that Thomas has been making sizable progress in his rehabilitation since joining the Cavs several weeks ago. While the Cavs introduced Thomas without offering a given timetable on his return, expectations have seemingly changed dramatically.

“Thomas, who is recovering from right hip injuries, has made ‘real progress,’ according to the team, in three weeks of rehabilitation,” wrote Vardon. “Now, Thomas could be back and playing for the Cavs when they play the Golden State Warriors on Christmas.”

Vardon added context to Thomas’ recovery, revealing what kind of physical rehabilitation work the All-Star has been doing as of late:

“Thomas has worked with weights and hip mobilization stretches; he’s run in the pool and on a weightless treadmill, and is shooting stationary shots on the court with no ill effects.”

It was always assumed that Thomas would miss a significant portion of the the 2017-18 season. If the report is accurate and Thomas is able to return by Christmas, however, it would give him and the rest of his teammates more than enough time to build the on-court chemistry needed to make a deep playoff run and potentially bring another NBA championship to Cleveland.