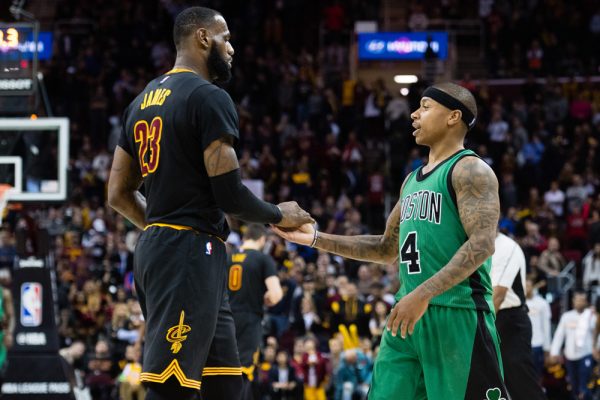 The chemistry between one of the Cleveland Cavaliers‘ newest acquisitions, Isaiah Thomas, and their most important player, LeBron James, serves as one of the keys to whether or not the team can dethrone the NBA champion Golden State Warriors next June. From one account, the early stages of that experiment are off to a good start.

#Cavaliers Isaiah Thomas on conversation with LeBron James: "He is excited about what we can bring to the table and help."

Thomas said he's texted with LeBron, says "he's excited about playing with the best player in the world." #Cavs

Thomas made the comments at his introductory press conference on Thursday, with the “we” reference indicating forward Jae Crowder and center Ante Zizic. Crowder will offer solid defense, while Zizic has potential to contribute, yet remains a wild card in the deal that sent Kyrie Irving to the Boston Celtics. Thomas will have the tall task to replace Irving and will also have the uncertain situation of continuing to rehabilitate his injured hip. However, Thomas showed last season that when healthy, he’s an All-Star performer.

There has been talk that James was discouraged by the prospect of Thomas’ injured hip damaging the chances of the Cavaliers reaching the NBA Finals for a fourth consecutive season. The above tweet would appear to show that James has moved past such thinking and is ready to again lead the challenge of winning the fourth NBA title of his storied career.