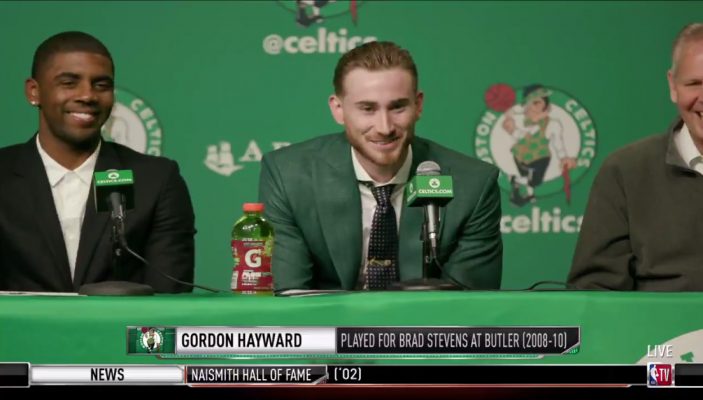 On Friday, Kyrie Irving and Gordon Hayward sat side by side at a Boston Celtics press conference to give the media and fans in Boston a look at the two newest members of the franchise.

At one point during the press conference, Hayward spoke about how he and Irving had been interested in playing together in the past. He looked back at when he had visited the Cleveland Cavaliers as a restricted free agent in 2013, joking that LeBron James‘ decision to rejoin the Cavs in 2014 made their need for another talented small forward such as Hayward obsolete.

“I went to Cleveland on a visit when I was restricted free agent and Kyrie came in and you know, was saying how much fun it would be if I was on the team, and you know, kind of recruited me to go there, and then LeBron came and that kind of squashed that whole thing,” he joked. “But it came full circle and here we are now.”

Bleacher Report posted the moment in an recent Instagram video.

Gordon Hayward on potentially joining the Cavs: "And then LeBron came and squashed that whole thing." ? (h/t @houseofhighlights)