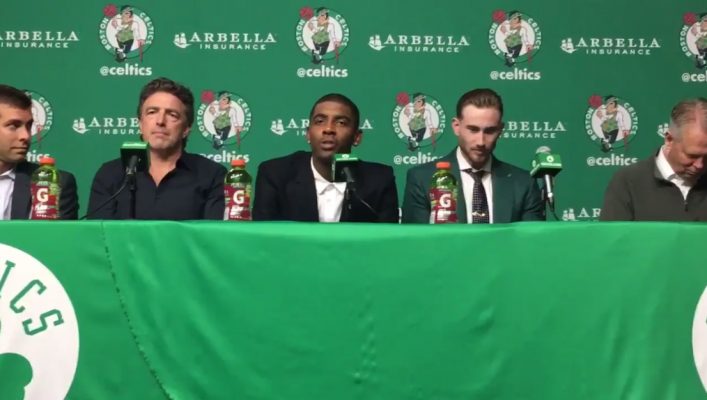 On Friday, Kyrie Irving was officially introduced as a member of the Boston Celtics. During the press conference, Irving took time to reflect on what playing with LeBron James has taught him over the past three seasons. While he admitted the two have not spoken since Irving was dealt to the Celtics, he had nothing but praise for his former teammate.

An extremely articulate Kyrie Irving on his relationship with LeBron James. Heartfelt and appreciative. pic.twitter.com/S7sA8rsUiq

“I haven’t spoken to him (James) and my intent, like I said, was for my best intentions,” Irving began. “To look back at the amount of ground we covered that last three-year span, or even before that because…to really realize how special that was and how much stuff happened in that amount of time, I’d be sitting up here and telling you guys a lie if I didn’t tell you I learned so much from that guy.”

He then continued to reflect on what playing alongside an all-time great like James has taught him.

“The perfection of the craft comes in a variety of forms and you watch, you ask a lot of the great players, ‘What does it take to be great?’ I’ve had the unique opportunity to play with one of the greats and it was awesome,” he said. “When you look back and you’re eternally grateful for the moments you’ve had and shared; you’re able to put peace with that journey and start anew.”

Since the trade, Irving has said all the right things to try and move on from the chaos of last month. While he seems happy in his new situation, only time will tell if it was truly the right decision for the young All-Star.