Report: Bucks Have Offer on Table for Kyrie Irving If Celtics Deal Falls Through 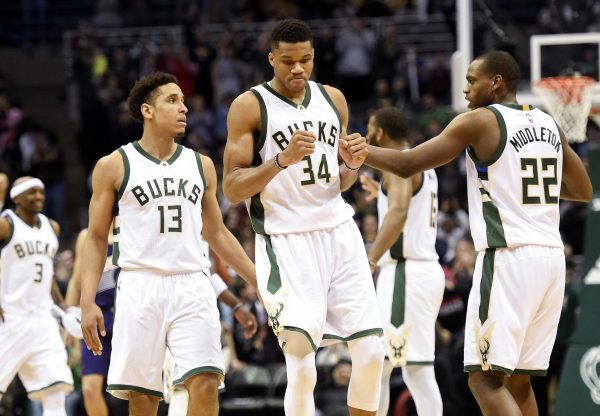 Last week it appeared the Kyrie Irving drama was coming to an end after the Cleveland Cavaliers and Boston Celtics agreed on a deal that would send Isaiah Thomas, Jae Crowder, Ante Zizic and Brooklyn’s 2018 first-round draft pick to Cleveland in return for the disgruntled point guard. With the trade hanging in the balance following Thomas’ physical, however, the Milwaukee Bucks have reportedly offered a trade deal of their own.

According to ESPN’s Zach Lowe, the Bucks have become an option for the Cavs if the deal with the Celtics should fall through and have reportedly offered Malcolm Brogdon and Khris Middleton in return for Irving.

“The Milwaukee Bucks lurk on the fringes of the Irving bidding with an offer centered around Malcolm Brogdon, the reining NBA Rookie of the Year, and Khris Middleton, sources say. The Bucks have not yet put a first-round pick on the table, sources say, but the bet here is that they would to get the deal done — or if Irving shoed any interest in staying in Milwaukee long-term.”

Lowe discussed how the two would fit on the Cavaliers if a trade should take place.

“Brogdon and Middleton are good. They can shoot 3-pointers, and switch across multiple positions on defense. They are tailor-made to help the Cavs mimic the Golden State Warriors, the only team LeBron (James) really cares about right now.”