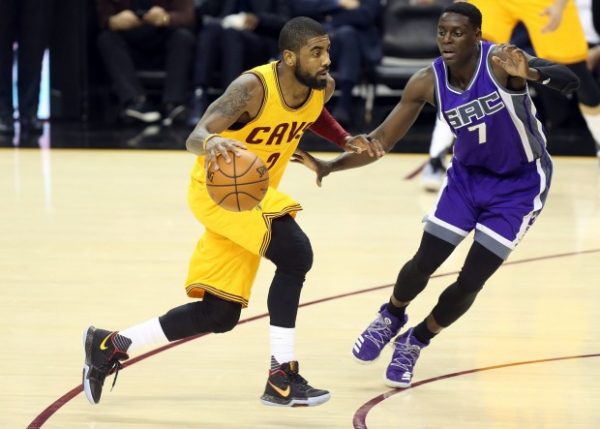 (Cleveland, OH) – Despite a second straight triple-double from LeBron James, sloppy play and a brutal night at the foul line resulted in the Cleveland Cavaliers suffering an embarrassing 116-112 overtime loss to the Sacramento Kings at Quicken Loans Arena on Wednesday night.

The defeat, the Cavs’ sixth in their last eight games, saw them commit 18 turnovers and miss 17-of-34 free throws. Then, in the extra session, they watched the Kings outscore them 10-1 in the final 2:30 of action.

“We just have to get up there and knock them down, myself included,” Kyrie Irving said after the game about the team’s effort at the foul line.

Kevin Love’s 3-pointer had given the Cavaliers a 111-106 lead, but the Kings then responded with six straight points and held a one-point lead with 35.4 seconds left. Love then split a pair of free throws to tie the game at 112.

On the next possession, Sacramento’s Arron Afflalo hit a wide-open 3-pointer with 17.3 seconds remaining, with the Cavaliers then committing their final turnover of the game. That resulted in DeMarcus Cousins splitting a pair of free throws with 5.3 seconds left to clinch the contest.

“We missed some really good looks and they made their shots,” James said. “We had our opportunities. We just have to do better.”

The Cavs had narrowly missed losing in stunning fashion at the end of regulation as the Kings’ Cousins stole an inbounds pass with 3.4 seconds left and put up a desperation 3-pointer at the buzzer that failed.

Cleveland struggled all night to gain some sort of foothold and had looked to have finally gained the upper hand by taking a 97-87 lead with 7:44 left in the fourth quarter. However, Sacramento then scored nine unanswered points to get back in the game, with the game remaining tight right up until Cousins’ missed attempt, which sent it to overtime.

James ended the night with 24 points 13 rebounds and 11 assists, one of five Cavs players to score in double figures. Love tossed in 21 points and hauled down 16 rebounds for another double-double, while Kyrie Irving contributed 20 points and six assists. Iman Shumpert added 16 points and Kyle Korver had 12 on the evening.

“When I played for the (Los Angeles) Lakers, we had a rough stretch that’s like what we’re going through,” Cleveland head coach Tyronn Lue said. “Every ball is bouncing the other team’s way and when you make a mistake, they make you pay.”

During the first half, the Cavaliers came out flat and allowed the Kings to score the first 10 points of the game. Cleveland then appeared to have taken control of the game with a 22-3 run before Sacramento then scored nine of the final 13 points of the opening quarter.

“There wasn’t much that we did out there tonight that looked like us,” Love said. “Missed free throws, turnovers. We need to win our games at home.”

Coming out of the break didn’t provide the Cavs with any added boost as the Kings remained in the lead for a good portion of the third quarter. They were able to eventually take a 79-77 lead into the final period, in part because of their 74 percent shooting from the field on 14-of-19 attempts.

“We just have to play better,” Lue said. “18 turnovers and 17 missed free throws. When you’re struggling to win games, you can’t afford to do that.”

For the contest, the Cavs were without the services of veteran Richard Jefferson, who was not in the arena due to personal reasons.

“We’re trying to get better. It doesn’t matter who we’re going against, we know we’re going to get everybody’s best,” James said. “We’ve got another one on Friday. We’ll probably come in at noon tomorrow, watch some film and see some things we can do offensively and defensively and get ready for Brooklyn.”

Cleveland will be back in action on Friday night when they host the Brooklyn Nets in a game that will tip off just after 7:30 p.m.