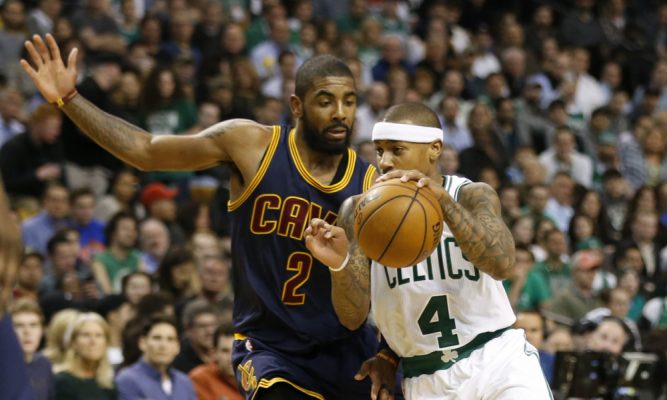 New developments on Saturday surfaced between the Cleveland Cavaliers and Boston Celtics and their pending trade involving star point guards Kyrie Irving and Isaiah Thomas, as both teams continue to be in a standoff with each other.

As reported by writer Jason Lloyd of The Athletic, Boston does not intend to add on to the original trade package offered to Cleveland:

“One source indicated Saturday the Celtics’ final offer of Thomas, Jae Crowder, Ante Zizic and Brooklyn’s unprotected first-round pick was their best offer. There will be no more negotiating.”

Lloyd also tweeted on Saturday evening that the condition of Thomas’ hip shouldn’t have come as a surprise to the Cavs.

Source with knowledge of IT's hip said nothing in physical should've surprised. They built offer around his condition & told Cavs everything

Irving took his physical on Saturday in Boston, while the Cavs have until 10 a.m. ET on Thursday to have Thomas pass his physical. However, the deadline for Thomas’ physical can be extended if both teams agree to do so.

This could end up being a very difficult situation for the Cavs and Celtics. If the trade is voided, Irving has already said that he does not intend to report to training camp for the Cavs.

Cleveland would likely have to find another team to engage in trade talks with if the deal falls through with Boston.