Report: Kyrie Irving Requested Trade Because of Deal That Nearly Went Down Before NBA Draft 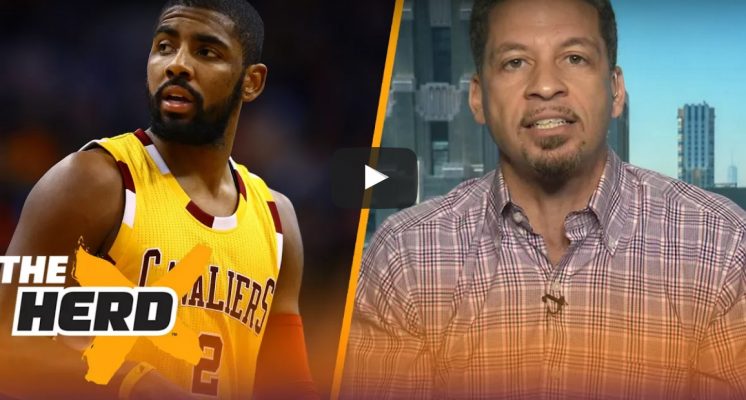 However, according to ESPN’s Chris Broussard, there’s one main reason why that deal didn’t go down, and it had everything to do with LeBron James.

“I’m told that the Cavaliers had a deal done, heading into the draft. This was reported by Cleveland Scene Magazine, nobody really picked it up. I’ve talked to a few people, they said it was definitely true,” Broussard said. “But what the deal was that Cleveland would send Kyrie to Phoenix, which does wants Kyrie, Robert Sarver wants Kyrie Irving. They would send him to Phoenix. Phoenix would send Eric Bledsoe and the No. 4 pick back to the Cavaliers. The Cavaliers would send the No. 4 pick to Indiana for Paul George. So you’re getting Eric Bledsoe and Paul George for Kyrie Irving.

“Now, that was going to happen. Dan Gilbert goes to LeBron and says, ‘Look we got this deal on the table, I’ll do it if you’ll commit long-term to stay in Cleveland.’ LeBron won’t commit. Now you can read into that if you want that he would leave or he just wants to keep his options open. But he would not commit, so Dan Gilbert would not do the deal.

“Now Kyrie Irving finds out about the deal, whether it was from David Griffin telling him after he left or however he found out, but he found out about the deal. And he assumed there’s no way the Cavaliers are doing this unless LeBron gives consent. That’s why he got mad with LeBron. He thought LeBron was in on it. LeBron’s take was more, ‘Look I’m not trying to trade Kyrie Irving, he’s great. But that’s a heck of a deal, Eric Bledsoe and Paul George. So if you do it, hey that’s a great deal.’ But Kyrie took it as LeBron wanted him out of there. A few days or a week later, that’s when Kyrie made his trade request.”