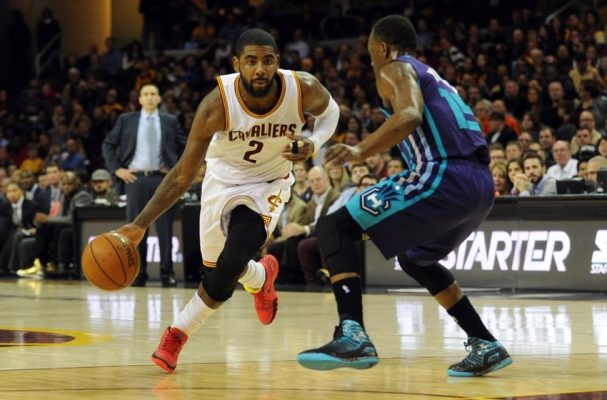 In Sunday afternoon’s 112-108 victory over the Philadelphia 76ers, Cleveland Cavaliers point guard Kyrie Irving took over the game, scoring 19 of his 39 points in the fourth quarter and personally leading the Cavs to their comeback win. The performance was just the latest in a growing string of stellar clutch performances that emphasized the high level of his one-on-one game.

Irving spoke after the game about how he’s able to dominate in one-on-one situations, especially late in games.

“Where I’m from in Jersey and New York, it’s about the one-on-one competition and the crowd getting into it, and they want to see one-on-one play,” Irving said. “So I grew up around that culture, and now I get to utilize it in the NBA.”

The All-Star point guard’s prolific production during Sunday’s final quarter was the byproduct of him taking mental notes throughout the game. Specifically, he said was looking for weak spots on certain defensive sets.

“Taking plays in mentally, picturing it,” Irving said. “Plays that we would have in the first half where I’d come off pick-and-rolls, and I saw how Joel Embiid was playing the pick-and-rolls as well as Jahlil (Okafor). So, just taking mental screenshots and then using that for the fourth quarter to execute down the stretch.”

Emphasizing how he’s not under any pressure to always carry the load, Irving cited the available talent on Cleveland’s roster as the key reason for that flexibility.

“It’s just about picking and choosing,” Irving said. “Knowing where your spots are. When you have great players like this on our team, it can come from any of us (at) any given moment. So, when any of us gets it going, we always continue to go to that person. But I wouldn’t trade it for the world. Whether it’s needed for me to go get however many in the fourth quarter — or Kevin (Love) or Bron (James) or Channing (Frye). It can be anybody’s night. It’s just that we’re always trusting the pass, and we’re always trusting each other and making each other better. So that fourth quarter was just the night for me to be aggressive.”

Yet Irving’s head coach, Tyronn Lue, stated in his postgame remarks that Irving has the ability to become a scoring machine if called upon.

Irving twice scorched the nets for more than 50 points two seasons ago. Yet even if he suddenly became that type of lethal scorer, his permanent memory with Cleveland fans will forever be a different clutch fourth quarter that he played in last June. That performance was capped by his iconic 3-point shot over Stephen Curry to help the Cavs capture their first-ever title.