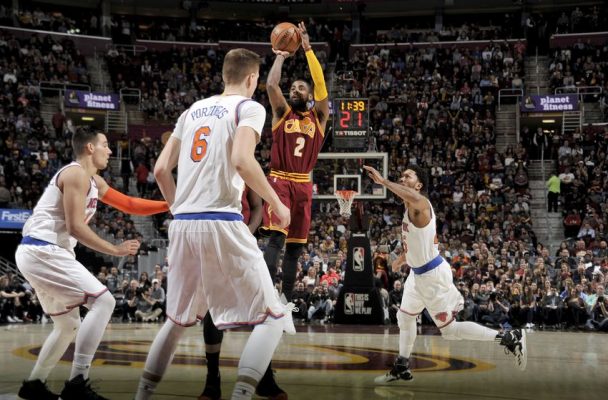 On Tuesday, ESPN’s Adrian Wojnarowski pegged New York Knicks star big man Kristaps Porzingis as one of the Cleveland Cavaliers‘ primary targets in any potential Kyrie Irving trade. Unfortunately for the Cavs, however, it appears that the Knicks front office is committed to holding onto the talented 22-year-old.

According to Newsday‘s Steven Marcus and Mike Rose, the Knicks do not plan getting rid of Porzingis any time soon:

“[Knicks president] Steve Mills and [Knicks general manager] Scott Perry on the record were very clear that Kristaps was part of the future,’’ a source said in reference to comments made last month by both executives. “In all the discussions since then — there were other rumors before that Cleveland would want Kristaps — and it didn’t seem that [the Knicks] were interested at all in a conversation.’’

The article went on to say that while there have been reports that Porzingis and the Knicks front office have not been seeing eye-to-eye after he skipped his exit meeting with the team at the end of last season, the two parties are currently in communication.

As for Porzingis, he recently told NBA.com that New York has become his home.

“So far it’s been tough in New York, but my journey is only beginning and I hope to stay there my whole career so as a city we can have some fun and win some games and do something big,” Porzingis said. “For me, it’s now home.”

The Cavs have expressed interest in gaining a young star like Porzingis in return for Irving so that they can begin building towards the future. However, it seems they will have to look elsewhere for that coveted blue chip player.