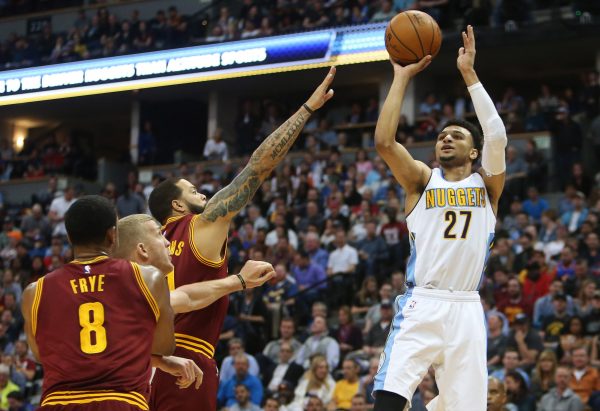 The Cleveland Cavaliers have recently stated their hope in retaining Kyrie Irving into the upcoming season, but that does not mean they aren’t pursuing trade options for the unhappy point guard. According to a recent article by ESPN’s Adrian Wojnarowski, the Cavs are targeting young stars in potential trades for Irving.

The Cavs have previously expressed their interest in gaining a veteran starter and a blue-chip player to pair with LeBron James, and it seems their commitment to gaining a talented youngster in any trade deal has only grown thanks to the rumors that James may leave Cleveland when he becomes a free agent next offseason.

“The Cavs aren’t giving up on the possibility of re-signing James next summer, but they are no longer investing blind faith in the hope he will stay. For James, a reluctance to commit comes with an emerging set of complications. Beyond Irving’s decision to ask for a trade, Cleveland has determined that it’s unwilling to simply be reactive to James’ possible departure,” Wojnarowski writes. “Of course, Cavaliers officials prefer to re-sign James to a long-term deal and chase titles together into his twilight, but the Cavs are treating his unwillingness to commit as a call to protect themselves long term in the Irving trade, league sources said.”

The best way for the Cavs to protect themselves is to make sure they receive a young talent from any potential Irving trade. As a result, Wojnarowski identified several players who are of interest for the Cavs:

Wojnarowski continued to say that Porzingis has become the Cavs’ primary target and while both sides have yet to come close to a deal, that may be subject to change:

“This Irving trade process has been deliberate, and teams believe that the Cavaliers expect more aggressive conversations in September, closer to the start of training camps. Porzingis has emerged as a primary Cleveland target, but that’s a conversation that can occur only with Cleveland’s willingness to unburden the Knicks of the three years and $55 million left on Joakim Noah‘s contract. For now, the conversation is a nonstarter for the Knicks, league sources said.

“For the right All-Star player, though — Irving or otherwise — multiple NBA teams are seriously questioning how emphatic of a ‘no’ that will stay for New York. There continues to be distance between Porzingis and the organization, and how the Knicks truly value Porzingis’ future could become clearer once they’re together to begin the season.”

It’s been a bit of a shock to see a team that has traveled to the last three NBA championships with relative ease deal with so much offseason drama, but it is becoming clear that many changes may be on the horizon for the Cavaliers. Still, it is heartening to see that instead of reaching for the lowest hanging fruit and making comfortable assumptions, the organization is developing a well-thought-out plan for the future.

Hopefully it’s the right one.