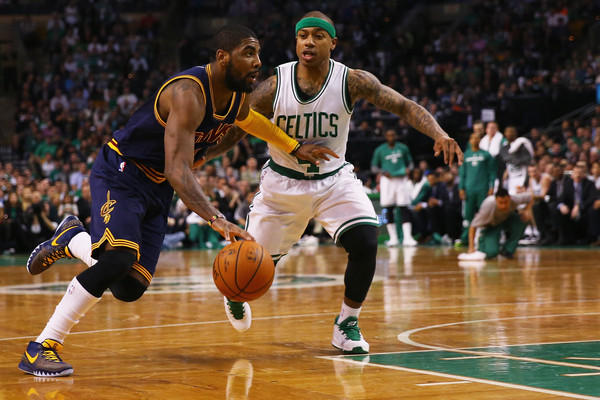 Trade talks have started to heat up between the Cleveland Cavaliers and the many teams interested in acquiring Kyrie Irving. So far, a clear frontrunner has yet to reveal itself, but that could change at any moment. According to Cleveland.com‘s Joe Vardon, the Boston Celtics have the pieces to put themselves in a great position to land the young All-Star.

One fan asked Vardon what he thought the best potential trade option the Cavs could be looking at and he did not disappoint. According to Vardon, league sources have told him that the Cavs could be offered a blockbuster deal from the Boston Celtics.

“A league source said perhaps the best Cleveland could do would be something with Boston, Isaiah Thomas, Jae Crowder, and multiple first-round picks, and then use Thomas to trade for a different piece.” Vardon said.

Considering reports regarding other trade proposals from teams like the Miami Heat and Minnesota Timberwolves, receiving a star player like Thomas, a stout defensive forward like Crowder, and multiple first-rounders in return for Irving would be a huge prize.

While a trade has not come to fruition yet, trade rumors have been bubbling up at a faster and faster pace in recent days, a sign that the Cavaliers may be fielding some real offers that could convince them to deal the disgruntled star.