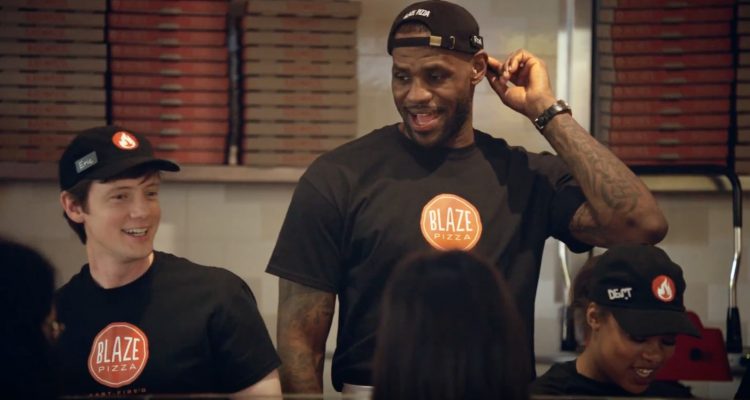 Even though things might not be going as LeBron James would have hoped with the Cleveland Cavaliers this offseason, it’s still pretty good to be King.

On Tuesday, ESPN‘s Darren Rovell reported that James’ investment venture in fast-casual pizza chain Blaze Pizza has ballooned in value from around $1 million to approximately $35 million.

James and his business partner Maverick Carter are always on the lookout for new companies to invest in, but their financial adviser Paul Wachter admits he often advises against his clients getting involved in the food industry:

“We don’t typically advocate for our clients to invest in food businesses,” Wachter said. “The risk-reward equation is not generally that great, and there’s a lot of grinding and blocking and tackling, and it takes a while for a concept to go global.”

Blaze Pizza was different, however, and after making approximately $30 million off a stake in Beats by Dre, James and Carter were looking for their next move.

“LeBron and I have always been about finding companies that we truly believe in and putting real money into them,” Carter said. “We’re not talking putting in $15,000 or $20,000. It’s real money plus the expertise, understanding and knowledge that we bring, as well as bringing LeBron’s name and likeness to the product.”

At first, James was not able to publicly endorse Blaze Pizza thanks to his endorsement deal with McDonald’s, but in 2015 James made the decision to leave McDonald’s and focus on endorsing the company that he owns about 10 percent of.

The impact of his endorsements were felt almost immediately.

“Every time LeBron tweets about Blaze, it’s like a sonic boom,” co-creator Elise Wetzel said. “It jump-starts the conversation with tens of millions of people in the U.S. and around the world and leads to a genuine interaction between people who know and love the brand and people who haven’t heard of us.”

A video starring James working as “Ron” at a Blaze Pizza gained millions of views on YouTube, proving just how much of an asset James’ star power has been for the growing company.

While his $35 million return seems huge, Blaze Pizza is nowhere near finished growing. According to industry tracking firm Technomic, Blaze Pizza could become the fastest-growing food chain in North American history. 200 stores have been created in four years, and the company has a goal of building 1,000 stores by 2022.

Whether it’s on the NBA court, or in the business world, James really can’t help but win.