Don't Miss
Home / Media / Damian Lillard: I Would Love to Go to the Finals Every Year With LeBron

Damian Lillard: I Would Love to Go to the Finals Every Year With LeBron 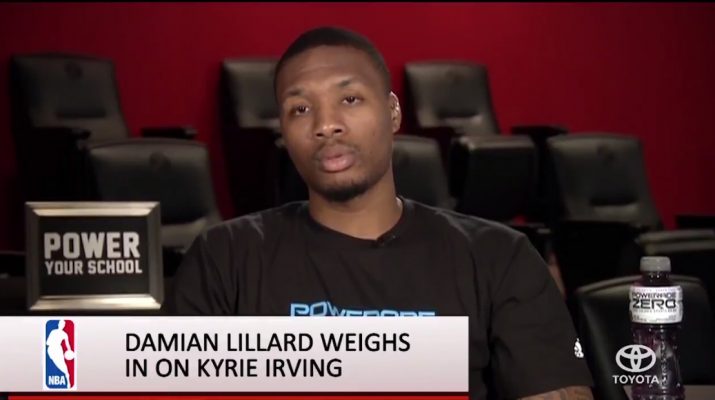 One of the many alleged reasons for Kyrie Irving‘s trade request floating around the NBA is reportedly that the 25-year-old All-Star is jealous of fellow point guards John Wall and Damian Lillard, who are both seen as the uncontested leaders of their respective franchises.

According to ESPN’s Ramona Shelburne, David McMenamin, and Brian Windhorst, Irving has expressed a desire to be the face of a franchise as well:

“Irving chafed about how peers such as Damian Lillard and John Wall were the center of their franchises and catered to accordingly,” they wrote. “There’s irony there, as Wall was envious of Irving’s Nike shoe deal and Lillard has never advanced beyond the second round of the playoffs. Irving has been to three Finals and has a championship.“

On Monday, Lillard joined Sports Illustrated to say that he is actually envious of Irving’s current situation with the Cleveland Cavaliers.

“Who wouldn’t want to go to the Finals every year? I think they’ve been to the Finals the last three years,” Lillard said. “I would love to do that.”

He was then asked if he would ever ask for a trade if he was on the same team as LeBron James.

“Just watching from the outside you see how easy he makes the game for everybody else,” he explained. “I’m not sure what it’s like playing with LeBron the person, but the player, you know, I don’t see why anybody wouldn’t want to play with him.”

See what else Lillard had to say below:

Damian Lillard​ on Kyrie Irving​ wanting out: 'Who wouldn't want to go to the Finals every year?' pic.twitter.com/W7WzzJFGRi

Clearly, Irving and Lillard have different very ideas of what success in the NBA actually means.

While Lillard seems like he’d be willing to sacrifice his current role as the face of a franchise to win championships, Irving appears to be prepared to play for a less talented team as long as he is the focal point and center of attention.