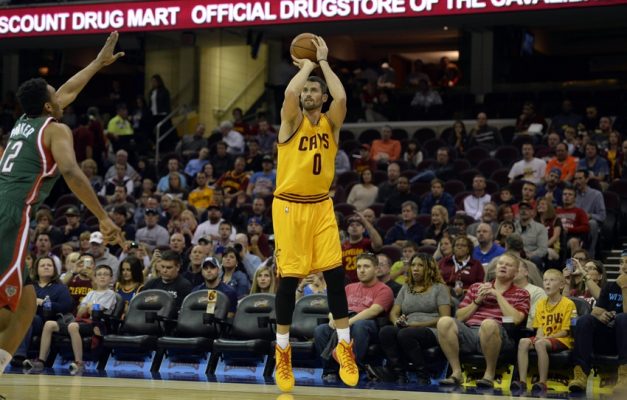 Since Kevin Love arrived to play for the Cleveland Cavaliers in 2014, his jump shot has been the source of a wide array of comments. Many of them have been negative because of his periodic struggles that included a drop in his 3-point shooting percentage to 36 percent last season.

Much of that criticism has faded away since the start of this season, and especially after Love scorched the nets at Quicken Loans Arena on Wednesday night. In that game against the Portland Trail Blazers, he scored 34 points in the first quarter as part of a 40-point night. That was followed on Friday night by 27 more points against the Dallas Mavericks.

Jason Lloyd of the Akron Beacon Journal notes that one simple change appears to be the reason for his success in the last two games.

“Kevin Love was watching film recently with assistant coach Phil Handy when he noticed a flaw. Love was hesitating too long before shooting 3s, and sometimes not shooting them at all.”

Lloyd went into more detail about how the problem had developed.

“When defenders closed out to him on the 3-point line, Love sometimes pump faked and drove the lane trying to draw a foul. Sometimes he passed up a shot altogether and sometimes he hesitated and shuffled his feet. None of it was what he wanted.”

The proof of success can be seen by simply looking at the numbers.

“As a result, Love has spent the last two games focusing on catching and shooting with no hesitation. It has made a huge difference. Love shot 32 percent from 3-point range through the first 12 games (18 of 57). He’s 15 of 21 (71 percent) in the last two. All 21 of his attempts have been off catch and shoots.”

By his own account, Love was able to quickly recognize the simplicity of the concept.

“So many guys close out to me so hard, but having my size I’m able to get the ball off quick if I just catch and shoot,” Love said. “I think I saw that and I’ve been able to do that. That’s only going to open up more for everybody. Feels good right now.”

Love has 68 more games to hone his shot even further so that it will be properly fine-tuned in time for the postseason.