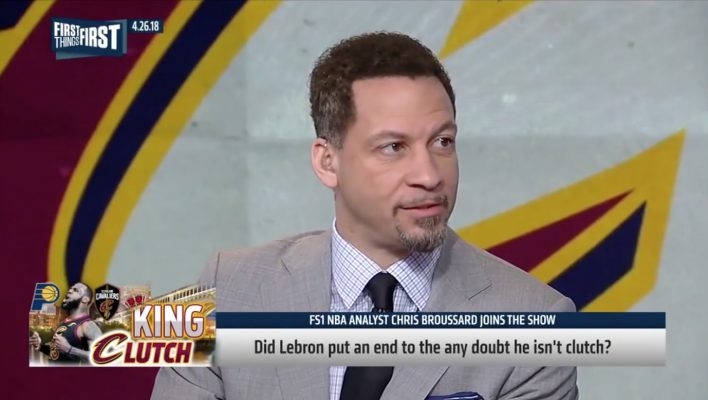 When Cleveland Cavaliers forward LeBron James connected on his buzzer-beating 3-pointer to win Game 5 of the Cavs’ playoff series against the Indiana Pacers, it gave clear evidence of his ability to once again deliver in the clutch. That notion wasn’t always prevalent with some members of the media and fans, with Fox Sports analyst Chris Broussard pointing to another Fox personality, Skip Bayless, as the originator of a belief that James couldn’t be counted on in crunch time.

Broussard appeared on the FS1 morning show “First Things First” and indicated that Bayless has pushed that narrative since James entered the NBA in 2003:

One of the earliest instances of Bayless criticizing James in this manner, according to Broussard, may also have been one of his most absurd remarks. That’s because it dealt with the crucial Game 5 Eastern Conference Finals game in 2007 against the Detroit Pistons, where James finished with 48 points. That barrage included 25 consecutive points and 29 of the Cavaliers’ last 30 points, with Bayless somehow managing to find fault with the fact that James was unable to win the game in regulation on a shot at the buzzer.

Broussard cited the 2010-11 period as the time when the issue of James’ clutch abilities really came into question, giving Bayless more ammunition. That’s because James’ subpar performance in Game 5 of a playoff series against the Boston Celtics in 2010 was portrayed as him quitting on the Cavaliers, which gained more credence two months later when he left in free agency for the Miami Heat. Then, in his first year with the Heat, James and his teammates lost in the NBA Finals in six games to the Dallas Mavericks.

The fact that James has since been a part of three NBA title teams and reached the Finals seven years in a row likely doesn’t matter to those who continue to embrace the discounted theory. Whether or not Bayless remains in this camp remains to be seen, though it’s become resoundingly clear that such opinions have little credibility.