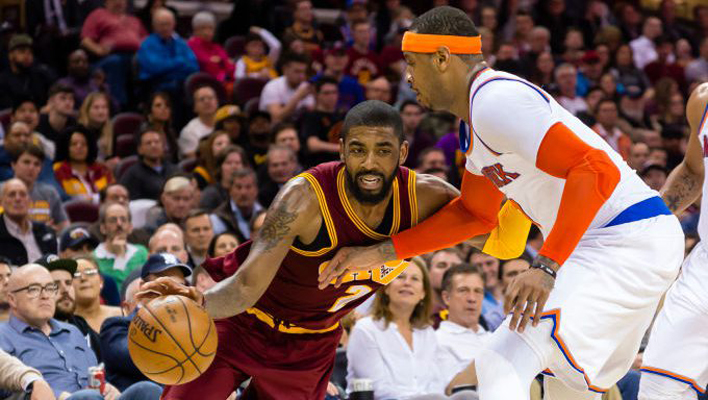 The explosive development surrounding Cleveland Cavaliers star point guard Kyrie Irving and his trade requests has added yet another fascinating wrinkle to the current NBA offseason.

News of several potential trade partners have already been reported, but according to Yahoo! Sports’ Jordan Schultz, the Cavs are currently in serious talks with the New York Knicks to bring Carmelo Anthony to Cleveland. Schultz added that the Phoenix Suns may also play a role in what would become a blockbuster three-team trade.

Schultz continued to say that the Cavaliers are confident they would be able to reach the Finals for a fourth straight year with the additions of Anthony and coveted free agent point guard Derrick Rose, however they would likely need more from the Knicks and possibly the Suns to make the trade go through.

#Cavs know they can make finals w/Rose, LeBron and Melo. Would likely need more than just Melo from #Knicks to make this move though https://t.co/KhVPdHl5Mb

According to sources, multiple players have already been discussed as a part of the potential deal, including T.J. Warren, Tyson Chandler, and Eric Bledsoe of the Phoenix Suns, and Channing Frye.

Source: #Cavs trying to work #Suns into a deal. Bledsoe and Chandler would be part of it. Suns want Frank Ntilikina and other picks. https://t.co/KhVPdHCGDJ

Potential for TJ Warren to be included too in this deal, source says https://t.co/H4yr7UQ1g1

Schultz went on to say that the Cavs and Suns had a similar deal on the table prior to the 2017 NBA Draft, which would’ve landed Paul George and Bledsoe in Cleveland in exchange for Irving.

No one could have predicted the news that Irving wanted out of Cleveland so desperately, but it’s starting to look like the Cavaliers will have a dramatically different roster taking the court next season.